According to Graham Warwick of Aviation Week, General Atomics Aeronautical Systems and Lockheed Martin are partnering to fly an Avenger UAV with a version of the F-35's stealth-imbued electro-optical targeting system (EOTS). 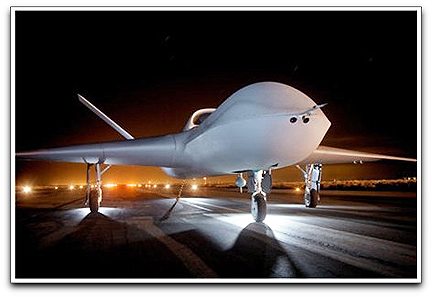 Mounted behind faceted sapphire windows, the mid-wave infrared sensor would reduce the swept-wing, jet-powered UAV’s radar signature, when compared with the conventional external electro-optic/infrared (EO/IR) turret on a Predator or Reaper. General Atomics is developing the Avenger as its candidate for the U.S. Air Force’s pending MQ-X requirement for a follow-on to the company’s MQ-1 Predator and MQ-9 Reaper UAVs, to enter service sometime after 2015.

Lockheed Martin calls its UAV version of the EOTS the Advanced Low-observable Embedded Reconnaissance Targeting (ALERT) system. Integration of the sensor onto the Avenger is being funded internally by the companies. Lockheed Martin says it is working on the electrical and mechanical interfaces between the ALERT and the Avenger and has performed a fit check with the UAV’s outer mold line, but aircraft modifications have not yet begun. The F-35 EOTS, which provides air-to-ground infrared imaging and air-to-air infrared search-and-target, is in flight-testing on the company’s Sabreliner test bed and will fly on the first mission-system test F-35 late this year.