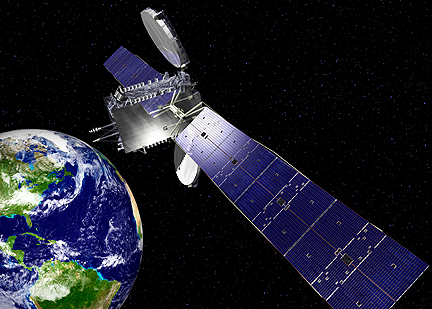 SES-1 satellite, image courtesy of Orbital Sciences
[SatNews] SES WORLD SKIES, a division of SES S.A. (Euronext Paris and Luxembourg Stock Exchange: SESG), has announced its SES-1 satellite has entered commercial service at the orbital location of 101 degrees West. Built by Orbital Sciences, SES-1 was successfully launched onboard an ILS-Proton Breeze M rocket on April 24, 2010. The spacecraft replaces AMC-2 and AMC-4 at the key orbital location of 101 degrees West over North America and is used to feed TV programming into virtually every cable network in the U.S.

SES-1 is a hybrid C- and Ku-band spacecraft that is part of an SES contract with Orbital Sciences for the provision of as many as five virtually identical satellites in order to replenish SES' North American satellite fleet. The SES satellites are based on Orbital's enhanced STAR(tm) 2.4 bus, the largest and most powerful communications satellite the company builds. SES-1 carries 24 active C- and 24 Ku-band transponders of 36 MHz capacity each. Six of the channels in each band can be cross-strapped to the opposite band, enabling new service capability. The spacecraft generates approximately five kilowatts of payload power and has two 2.3 meter deployable reflectors.