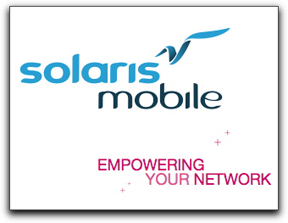 Product brochure...
Solaris Mobile Ltd, the Dublin-based operator of new pan-European hybrid satellite and terrestrial wireless networks for nexgen mobile services, has announced the development of a mobile gateway device allowing the reception of services in S-band on smart phones. The Solaris Mobile Pocket Gateway is a pocket sized S-band receiver which decodes DVB-SH TV, radio and data streams and relays them over WiFi via a mini web server built into the device. This technology allows any compatible smart phone with WiFi and a web browser to access mobile TV and radio over Solaris Mobile’s hybrid network without modification. The development was achieved in conjunction with Finnish company EB (Elektrobit) and resolves the issue of how to manage the availability of mobile phones with S-band reception. In addition, the Solaris Mobile Pocket Gateway is planned to be used in the car by linking to a roof-mounted antenna and providing passenger entertainment on mobile phones.