An interesting article in GeekWire by Alan Boyle reports that Asgardia, the crowdfunding venture that aims to create an independent nation in outer space, is due to reveal details of its first satellite mission next week — and Motherboard reports that the mission could set the stage for creating a data haven in orbit. 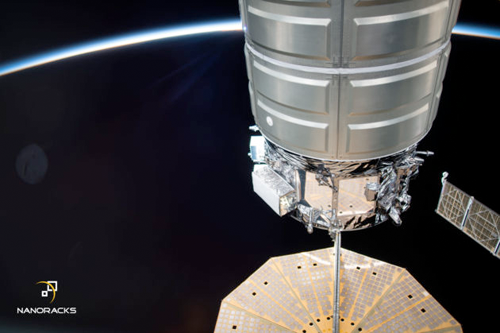 Asgardia says its nanosatellite would be deployed into space from a boxlike module attached to the exterior of Orbital ATK’s Cygnus cargo spacecraft, shown here.

Image is courtesy of NanoRacks.

Asgardia is due to delve into the details during a Hong Kong news conference on June 13; however, an application filed with the Federal Communications Commission (FCC) says the Asgardia-1 nanosatellite will be delivered to the International Space Station aboard an Orbital ATK Cygnus resupply flight that is currently scheduled for September. The smallsat will measure 4 by 4 by 8 inches, or roughly the size of a loaf of bread, and weigh about 5 pounds.

About 90 days after its space station arrival, the robotic Cygnus would unhook from the space station, boost itself into a 300 mile (500 kilometer) orbit and deploy Asgardia-1 into orbit under an arrangement worked out through Houston-based NanoRacks. Such a deployment procedure was used for the first time last November to place four Earth-monitoring satellites in orbit for Spire Global. The FCC application stated that Asgardia-1 will be in contact with Earth via the Globalstar satellite telecom constellation, and demonstrate long-term data storage in low Earth orbit.

To read the entire story by Alan Boyle, please access this direct link...