Airbus Defence & Space + SES Get Together For SES-14

[SatNews] Airbus Defence and Space (Airbus D&S) has been awarded a contract by SES, one of the world’s leading satellite operators, to design and develop the SES-14 satellite. 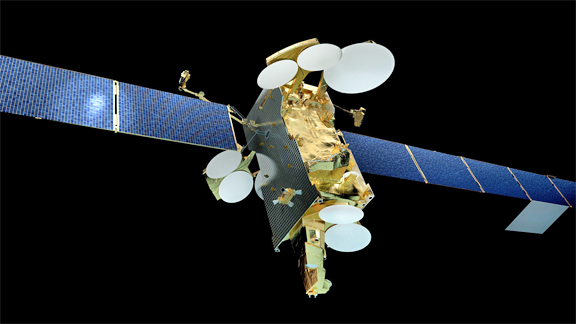 SES-14 is the first high-power satellite in the 4-ton class and will be based on Airbus Defence and Space’s ultra-reliable Eurostar platform in its E3000e variant, which exclusively uses electric propulsion for orbit raising (EOR), taking advantage of the reduction in mass that this technology enables with an exceptionally large payload. The satellite will have a double mission. The first will be a wide-beam payload of C and Ku-band, covering the Americas as well as a link to Europe. The other payload, called High Throughput Satellite (HTS) with numerous user beams, will combine an on-board processor with multi-beam coverage of the Americas and the North Atlantic.

SES-14 will carry seven antennas. It will have a take-off weight of 4,200 kg and an electric power of 16 kW. The satellite is scheduled for launch in late 2017 and its electric propulsion system will enable it to reach geostationary orbit in four months, depending on the type of launcher used. Its nominal operational position will be 47.5/48 degrees West. It has been designed to remain in service in orbit for more than 15 years.

François Auque, Head of Space Systems at Airbus D&S, said, “On SES-14, as on SES-12, the mass saving from electric propulsion enables us to combine two high-capacity missions, equivalent to two conventional satellites in one satellite.”

Martin Halliwell, Chief Technical Officer, SES, said, “SES-14 combines a large footprint with a powerful hybrid capacity offer and significant spacecraft technology innovations. It will help us to capture important growth potential, address the needs of video and enterprise customers and support the development of Next Generation Video and Next Generation Data services. Furthermore, it complements O3b’s high throughput satellite capacity in the medium earth orbit and helps us to deliver a truly unique and integrated offering”.

SES-14 is the 12th Eurostar satellite and the second all-electric satellite ordered by SES to Airbus Defence and Space. Nine of these satellites are in operational service and two are under construction.