ITT... The Secret Is Out + Celebrated (Satellites)

Those programs are GAMBIT (also known as KH-7 and KH-8) and HEXAGON (KH-9) ─ 25 years after their top secret Cold War-era missions ended. Rochester, N.Y.-based ITT Geospatial Systems, a division of ITT Corporation (NYSE: ITT), was a leading contributor to these once-secret programs. ITT will host an event Friday, Sept. 30, to honor the Rochester men and women who worked on these programs and to celebrate the 50th anniversary of the NRO. For many of the ITT and legacy program alumni in attendance, this will be the first time they can fully disclose to family and friends the groundbreaking work they accomplished in their careers and their contributions to U.S. national security. 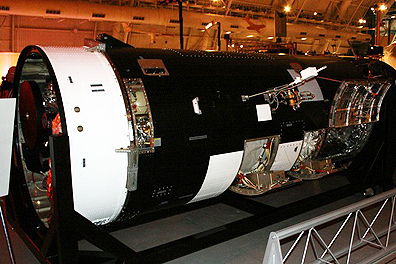 A side view of a KH-7 GAMBIT spy satellite on display at the Smithsonian National Air and Space Museum's Udvar-Hazy Center at Dulles Airport, Va., on Sept. 17, 2011.
CREDIT: Roger Guillemette/SPACE.com
“ITT is holding this celebration to recognize the pioneers who worked on these top-secret programs,” said Chris Young, president of ITT Geospatial Systems. “Some of the most critical work in support of Cold War-era intelligence was performed by leading-edge scientists, engineers and manufacturing specialists in Rochester. ITT has been fortunate to build a thriving business upon such a talented industrial base, and this event is about celebrating the accomplishments of so many dedicated professionals.” 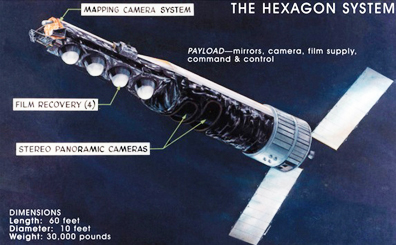 This National Reconnaissance Office released graphic depicts the huge HEXAGON spy satellite, a Cold War era surveillance craft that flew reconnaissance missions from 1971 to 1986. The bus-size satellites weighed 30,000 pounds and were 60 feet long.
CREDIT: NRO
From Rochester, ITT Geospatial Systems (which includes the legacy government division of Eastman Kodak) designed and built the entire GAMBIT camera payload. Once the film buckets for both the GAMBIT and HEXAGON reconnaissance programs were ejected by the orbiting satellites and captured mid-air by planes after a controlled atmospheric re-entry, they were flown to Rochester for processing and initial exploitation. This part of the top-secret program was called BRIDGEHEAD, referring to the Hawkeye Plant (a current ITT facility) located next to the Driving Park Bridge in downtown Rochester. “Twenty-five years after these programs’ missions ended, it’s exciting to finally share our work with our families and the public,” said Leslie Mitchell, retired program manager, GAMBIT, Eastman Kodak Research and Engineering. “These satellites featured some of the most advanced technology at the time, and it was an honor to serve with so many talented individuals.”