To update readers, EAN is the world’s first integrated satellite and air-to-ground network dedicated to providing a true in-flight broadband experience for Europe’s aviation industry and for millions of passengers who have been unable to access fast, reliable and consistent broadband access during their flights. 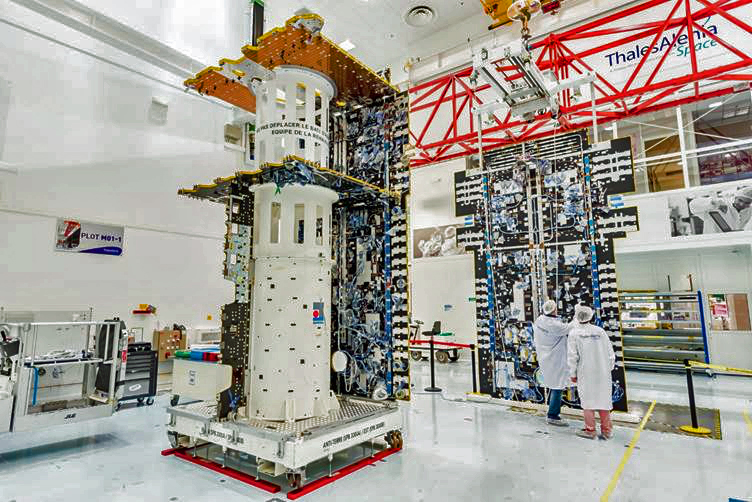 This key milestone was achieved on schedule following an extensive two-year build process in Toulouse and Cannes, France. The completed S-band payload module was shipped in early July to Thales Alenia Space’s testing center in Cannes, where satellite integration (‘mating’) was also successfully completed.  The satellite is now undergoing rigorous system end-to-end testing before it is declared ready for flight in 2017.

The satellite has been custom-designed to provide mobile satellite services (MSS) to aircraft flying over the dense European routes, exploiting Inmarsat’s 30MHz (2 x 15MHz) S-band spectrum allocation in all 28 EU member states, plus Norway and Switzerland. The satellite will be integrated with a LTE-based ground network covering approximately 300 sites, operated by Inmarsat’s partner Deutsche Telekom. Aircraft will switch automatically between satellite and terrestrial connectivity using an on-board network communicator for optimal service delivery.

Over the coming months, Inmarsat’s new S-band satellite will be put in a thermal vacuum chamber with no pressure to simulate the space environment and cycled through extreme high and low temperatures to ensure nominal operation. Mechanical and acoustic testing will then replicate the launch environment which will then be followed by final phase testing to compare any shifts or variations in measurements against the initial base line. Once these tests are complete, the satellite will be prepared for launch by SpaceX at Cape Canaveral in Florida, scheduled to take place in 2017.

The satellite will offer unprecedented high-speed capacity at 75Mb/s, with near zero latency while flying over Europe, according to the President of Inmarsat Aviation, Leo Mondale. He added that passengers will be able to enjoy an easy-to-use true broadband experience for internet streaming, gaming and other online services direct to their personal smart devices. In addition, with no moving parts on the aircraft, the solution is lightweight and also easy to install, robust and low maintenance. The coming together of Inmarsat and market-leaders across Europe, including Thales, Deutsche Telekom, Nokia, Cobham SATCOM and OTE, on this ground-breaking development will strengthen Europe’s position as a global technology innovator and support the continued growth of its aviation industry.

Michele Franci, Chief Technology Officer at Inmarsat, indicated that extensive testing is ahead, all of which will ensure the satellite is free from defects and will be able to survive the harsh launch and space environments that it will face, to include an end-to-end verification of all components to ensure that every component is operating within its defined parameters.