To learn more about the company, access this direct link to their website.
[SatNews] Clyde Space, the Glasgow-based company putting Scotland’s first satellite into space, has announced record sales of £1.65million for the last six months.

This is more than double the sales figure for the same period of last year and is the best performance since the company was founded by CEO Craig Clark in 2005. Craig revealed the figures as he prepared to ship the satellite, UKube-1, to Moscow this week for launch aboard a Russian Soyuz-2 rocket on February 10. From Moscow the satellite will be transported to Baikonur Cosmodrome in Kazakhstan for the launch, which had been scheduled for earlier this year.

Clyde Space is a leading producer of small satellite, nanosatellite and CubeSat systems—fully-functional satellites that ‘piggy-back’ on other launches to minimize costs and boost the commercial viability of space research.

Craig said he was delighted the launch date was now fast-approaching. “The sooner it’s launched the better because it will show our capabilities. UKube-1 will be the first of many nanosatellites produced at Clyde Space and is a fantastic mission for us to demonstrate our capabilities as a spacecraft mission lead.” 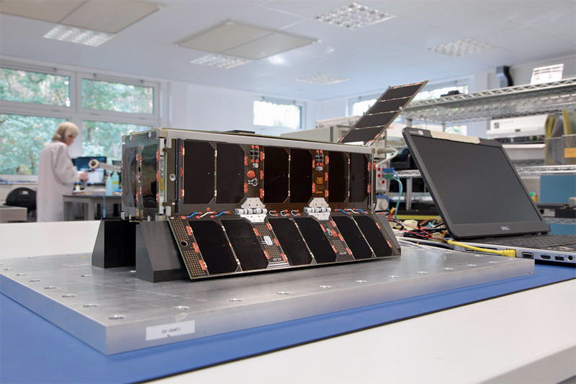 Photo of the UKube-1 satellite, photo courtesy of Clyde Space.

Craig used the occasion to reveal that sales of Clyde Space’s products had more than doubled since this time last year and to confirm a new $200,000 order for a CubeSat platform from the National University of Singapore, the latest in a string of prestigious, global clients. These include MIT (Massachusetts Institute of Technology), the US Air Force, NASA, aerospace giants SELEX and Raytheon and a list of other companies in the UK, USA, Europe and the Far East. Clyde Space supplies them with a range of products ranging from attitude and determination control systems for CubeSats to high efficiency solar panels that can operate in space.

Craig, who was awarded an MBE in the Queen’s Birthday Honours List this year for services to innovation and technology, said, “Most systems used in satellites are very expensive but what we provide is far more cost effective. What we’re doing will enable more missions with more complex objectives and make them more accessible.”

Clyde Space is also set to unveil the third generation of the company’s highly successful CubeSat Electrical Power System (EPS). Since developing the first commercially available EPS in 2006, the company has become one of the most successful suppliers of small satellite systems in the world and has won 40 percent of the global market for nanosatellites (CubeSats)

The UKube-1 nanosatellite was designed and manufactured by Clyde Space at their high-tech facility at the West of Scotland Science Park, Glasgow. It is one of the most advanced of its kind and the mission is the pilot for a collaborative, national CubeSat program bringing together UK industry and academia to fly educational packages, test new technologies and carry out new space research quickly and efficiently. The small but highly sophisticated satellites can carry multiple payloads and their applications can be used from anything from astrophysics research to tracking ships or wildfires or taking high-resolution photographs

Payloads in UKube-1 include the first GPS device aimed at measuring plasmaspheric space weather, a camera that will take images of the earth and test the effect of radiation on space hardware using a new generation of imaging sensor and an experiment to demonstrate the feasibility of using cosmic radiation to improve the security of communications satellites and to flight test lower cost electronic systems. The satellite will also carry a payload made up of five experiments that UK students and the public can interact with and an outreach program that also allows school children to interact with the spacecraft.