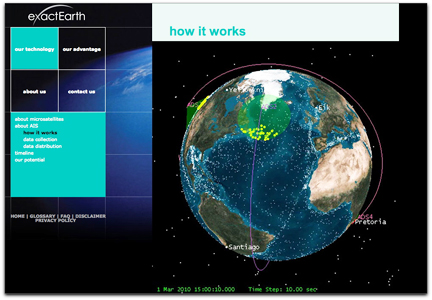 Company AIS info page...
exactEarth Ltd., the data services subsidiary of COM DEV International Ltd. (TSX: CDV), has signed a $1.4 million contract with the Canadian Space Agency (CSA) to provide space-based Automatic Identification System (S-AIS) data. exactEarth will supply the CSA with historical data collected previously by its AIS nanosatellite (NTS) as well as with datasets to be captured at times and locations specified by the CSA through March 31, 2010.

Launched in April, 2008, originally for technology validation purposes, NTS continues to orbit the Earth and gather valuable data on global maritime traffic. The newly collected data for this Canadian government contract represents the first use of exactEarth’s new Data Processing Centre in Toronto. The multi-million dollar, high-reliability facility has been under development for several months and is now operational. exactEarth began delivering data under this contract on February 12, 2010. The Canadian Space Agency has a keen interest in satellite-based AIS data, which has potential uses ranging from surveillance to safety at sea to environmental protection. This data will be used by several government departments to supplement their other sources of maritime information and help them develop and evaluate operational plans for the use of S-AIS data on an ongoing basis.