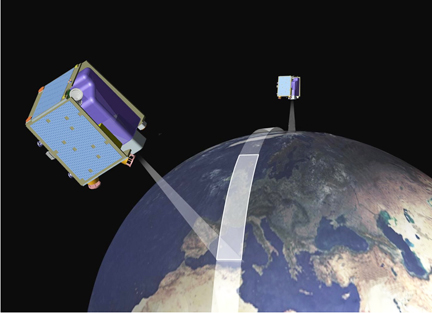 Artistic rendition of RapidEye Constellation - RapidEye hompeage link....
Integration software will now allow ESA and its user community efficient access to RapidEye's five meter pixel sized, multi-spectral data through an interface allowing semi-automated product and metadata exchange between RapidEye's ground segment and ESA's Coordinated Data Access System (CDS). ESA will be using RapidEye's satellite imagery mainly for the project 'Safer', a security and emergency project of the Global Monitoring for Environment and Security (GMES) program in Europe. GMES is a European program for implementing a European capacity for Earth Observation, with an objective to monitor and better understand the environment. By contributing to the success of the 'Safer' project, RapidEye will support ESA in reinforcing the European capacity to better respond to emergency situations deriving from storms fires, floods, earthquakes or landslides. The contract between RapidEye and ESA details that RapidEye will provide satellite imagery before and after an emergency event has occurred, provide 'emergency' service and rapid delivery upon request as well as delivering its imagery for non-emergency scenarios as necessary. With its constellation of five satellites, the RapidEye system has the capability to revisit an area daily, which accommodates frequent monitoring intervals and can provide the most up-to-date information on environmental changes. RapidEye signed the contract with ESA in late 2009, and has most recently supplied imagery of the flooded areas in Pakistan and Germany, as well as the recent area damaged by forest fires in southern France.