SpaceX... Talking To The Dragon 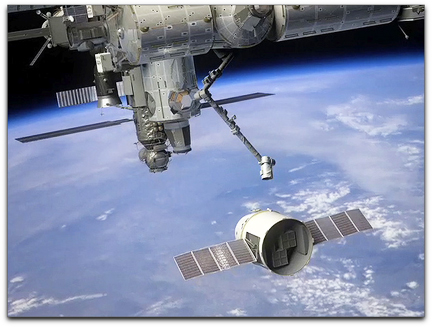 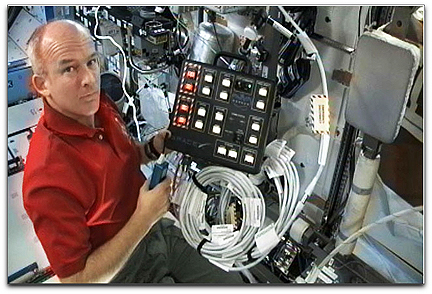 Astronaut Jeff Williams, Expedition 22 Commander (top) aboard the International Space Station, and engineers at SpaceX Mission Control in Hawthorne, California, perform activation and testing of SpaceX's new communications system for operations with upcoming Dragon spacecraft resupply missions to the ISS. Credit: Roger Gilbertson / SpaceX.
Space Shuttle Atlantis delivered the system hardware to the ISS during mission STS-129 in November of 2009. The on-orbit checkout began January 25, 2010, when astronaut Jeff Williams, ISS Expedition 22 Commander, worked with ground-based team members at SpaceX headquarters and ISS mission control in Houston to power-up and check out the new system. On March 11, SpaceX and NASA Houston performed an additional series of tests, using the new system to send communications between the ISS and the NASA Dryden ground station. This provided a baseline of the radio frequency performance and confirmed the first set of antennas performed as expected and is ready for mission operations. Additional testing is expected for a second set of antennas as well as ongoing verification of the overall system. Designed from the start to transport crew, SpaceX's Falcon 9 and Dragon spacecraft were selected by NASA to transport cargo to and from the ISS starting in 2011. The $1.6B contract represents 12 flights for a minimum of 20 tons to and from the ISS. The first demonstration flights under the COTS program are scheduled for 2010, following the inaugural launch of SpaceX's Falcon 9 rocket.