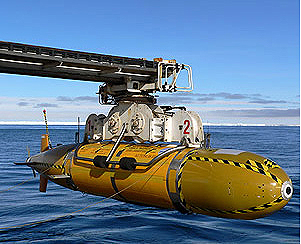 Autosub, a robot submarine built and developed by the U.K.’s National Oceanography Centre, Southampton, has successfully completed a high-risk campaign of six missions travelling under an Antarctic glacier.

Autosub has been exploring Pine Island Glacier, a floating extension of the West Antarctic ice sheet, using sonar scanners to map the seabed and the underside of the ice as it juts into the sea. Scientists hope to learn why the glacier has been thinning and accelerating over recent decades. Pine Island Glacier is in the Amundsen Sea, part of the South Pacific bordering West Antarctica. Changes in its flow have been observed since the early 1970s, and together with neighboring glaciers, it is currently contributing about 0.25 mm a year to global sea level. Steve McPhail led the Autosub team during the ten-day survey and he said:

“Autosub is a completely autonomous robot: there are no connecting wires with the ship and no pilot. Autosub has to avoid collisions with the jagged ice overhead and the unknown seabed below, and return to a pre–defined rendezvous point, where we crane it back onboard the ship. Adding to the problems are the sub zero water temperatures and the crushing pressures at 1000 m depth. All systems on the vehicle must work perfectly while under the ice or it would be lost. There is no hope of rescue 60 km in, with 500 metres of ice overhead.”

An international team of scientists led by Dr. Adrian Jenkins of British Antarctic Survey and Stan Jacobs of the Lamont-Doherty Earth Observatory, Columbia University, New York, on the American ship, the RVIB Nathaniel B Palmer, has been using the robot sub to investigate the underside of the ice and measure changes in salinity and temperature of the surrounding water. After a test mission in unusually ice-free seas in front of the face of the glacier, they started with three 60km forays under the floating glacier and extended the length of missions to 110km round-trip. In all, a distance over 500km beneath the ice was studied.

Using its sonar, the Autosub picks its way through the water, while creating a three-dimensional map that the scientists will use to determine where and how the warmth of the ocean waters drives melting of the glacier base. “There is still much work to be done on the processing of the data”, said Adrian Jenkins, “but the picture we should get of the ocean beneath the glacier will be unprecedented in its extent and detail. It should help us answer critical questions about the role played by the ocean in driving the ongoing thinning of the glacier.” The lead U.S. researcher on the project, Stan Jacobs, is studying the Pine Island Glacier with International Polar Year (IPY) funding from the National Science Foundation (NSF). One of the IPY research goals is to better understand the dynamics of the world’s massive ice sheets, including the massive West Antarctic Ice Sheet. If this were to melt completely global sea levels would rise significantly.

Autosub is an AUV – Automated Underwater Vehicle, designed, developed and built at the National Oceanography Centre, Southampton, with funding from the Natural Environment Research Council. Autosub has a maximum range of 400km and is powered by 5,000 ordinary D-cell batteries. The batteries are packed in bundles in pressure-tested housings. Either end of the seven-metre sub there are free-flooding areas where the payload of instruments are installed. It carries a multibeam sonar system that builds up a 3D map of the ice above and the seabed below. It also carries precision instruments for measuring the salinity, temperature, and oxygen concentrations in the sea water within the ice cavity, which are vital to understanding the flow of water within the ice cavity and the rate of melting. Autosub is 7m long and weighs 3.5 tons. Travelling at 6km hour it is capable of diving up to 1600m deep, and can operate for 72 hours (400 km) between battery changes. To view Footage of Autosub, the National Oceanography Centre's robot sub, being recovered from a successful mission surveying the underside of the Pine Island Glacier ice shelf in the Amundsen Sea, select this direct link to the YouTube video.