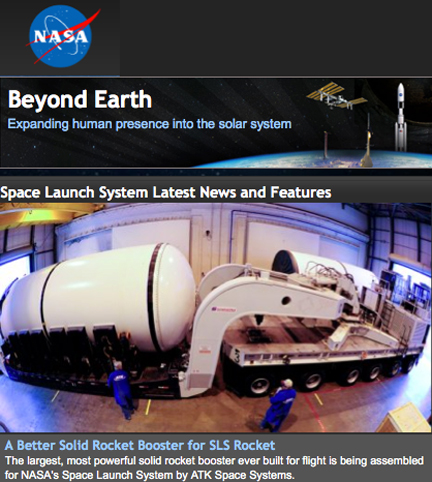 [SatNews] NASA is exploring options for larger payload fairings to enhance the cargo carrying capabilities of its...

Designed to be flexible for crew or cargo missions, SLS will be safe, affordable, and sustainable to continue America's journey of discovery from the unique vantage point of space. Initial SLS configurations will launch NASA's Orion spacecraft, which will sustain astronauts during space travel and provide safe re-entry from deep space. Future configurations could carry science instruments and other exploration payloads to destinations including Lagrange points, the moon, asteroids, and ultimately Mars.

"This is a no-cost examination of the aerospace landscape to identify existing components that could augment the rocket's architecture as we move beyond the initial Orion configuration," said Todd May, SLS program manager at NASA's Marshall Space Flight Center in Huntsville, Alabama. "SLS can make challenging human and science missions possible in large part because of the unprecedented size of the payload it can lift. We are hopeful industry may offer some innovative and affordable ideas about alternative fairing and adapter options."

The SLS will have an initial lift capability of 77 tons (70 metric tons) and grow in performance through a series of upgrades, providing more lift capacity and volume than existing launch vehicles. Larger payload fairing sizes enabled by SLS could reduce experiment design complexity and the rocket's high performance can decrease travel time and, by extension, cost and risk of science missions. NASA's Glenn Research Center in Cleveland is responsible for payload fairing development for SLS and will manage this RFI. Marshall manages the SLS Program for the agency. SLS will launch from NASA's Kennedy Space Center in Florida.