Featuring a new, easier to use interface as well as a job detail webpage that allows users to review and edit polygons before they are purchased, LandWorks Inc. has improved their Web AutoMapper online service that translates land legal descriptions into GIS-ready map polygons.

Clients can now have their property polygons mapped against USLandGrid’s national land base, with the option of buying land grid townships containing the mapped property. For about 20 percent of the cost of manual mapping, Web AutoMapper has simplified land records mapping in the oil & gas, renewable energy, mining, banking, utility, pipeline, state/local government, telecommunications, transportation, water and real estate sectors. The cost to map a legal parcel description with Web AutoMapper is $2 per polygon with the USLandGrid offered at just $7 per PLSS Township. 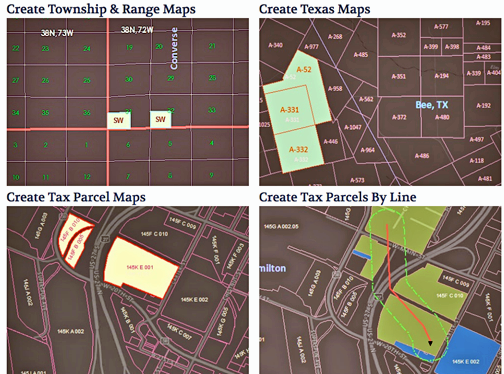 LandWorks first introduced Web AutoMapper in 2013 as an inexpensive, fast and easy method of processing many types of standard property descriptions and converting them into digital map polygons. Legal descriptions that would take days or weeks to map manually can be processed in minutes with this online software-as-a-service application.

A customer simply logs onto Web AutoMapper at and creates an account. The user then submits an Excel spreadsheet containing one or hundreds of legal descriptions in Jeffersonian Township/Range or Texas Survey/Abstract formats. Within seconds, Web AutoMapper provides an onscreen report detailing which polygons can be generated, which cannot, and shows an overview of the mapped polygons aligned to the USLandGrid. If the customer decides to proceed, a credit card is provided. For customers who don’t already own the Grid, they have the option of buying it by the township along with their mapped polygons.

Web AutoMapper generates a zip file of the purchased polygons and USLandGrid townships either in Esri shapefile or file geodatabase format in NAD 83 or 27 for direct download into Esri ArcGIS software as well as other popular mapping systems, such as IHS Petra, IHS Kingdom and LMKR GeoGraphix.

As a Cloud-based application, Web AutoMapper brings the full power of the standalone LandWorks AutoMapper software to every level of digital map user via the Internet. Introduced in 2002, the onsite AutoMapper package is purchased by an organization and sits behind their firewall as a production-grade GIS mapping tool. The software is used extensively by organizations that own or lease many land rights and must keep their property records up to date, such as local governments, energy companies and natural resource management entities.

According to LandWorks President Jerry Bramwell, anyone with a need to create land maps can do so in just a few minutes at minimal cost. LandWorks selected USLandGrid for inclusion in Web AutoMapper because it is the best basemap available for any industry or profession to use in mapping property legal descriptions. An important benefit of the USLandGrid is that its data layers are continuously updated as more accurate survey data becomes available.”