....to support the U.S. Army's Movement Tracking System ("MTS") and Blue-Force Tracking-1 ("BFT-1") programs. These orders were placed under the auspices of the BFT program office and brought the total orders received to-date under Comtech's $384.0 million BFT-1 contract to $378.2 million.

The first order for $12.0 million included the supply of MT-2012 mobile satellite transceivers to support the MTS program and MT-2011 mobile satellite transceivers to support the BFT-1 program. The second order was for the continued supply of satellite bandwidth, satellite network operations, engineering services and program management to support the MTS program for the period January 1, 2012, through March 31, 2012. Pricing for the second order has not yet been finalized with the U.S. Army and related funding cannot exceed $4.0 million. Additional orders aggregating approximately $0.6 million primarily related to engineering services to develop an operational interface between the MTS network and a standard FBCB2 protocol currently being used by the BFT-1 system. None of the above orders included a separate fee for the use of Comtech's intellectual property. Comtech continues to have ongoing discussions with the U.S. Army related to a potential multi-year sustainment contract including the licensing of its intellectual property to support the BFT-1 and MTS programs. 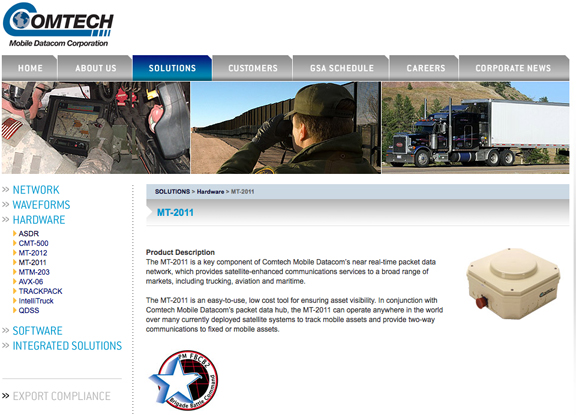 Fred Kornberg, President and Chief Executive Officer of Comtech Telecommunications Corp., said, "We are pleased to receive these orders which provide for the uninterrupted delivery of MTS services to the U.S. Army and which continues our long standing support of the MTS and BFT-1 programs. We also believe the receipt of additional hardware orders demonstrates the ongoing importance of the U.S. Army's BFT-1 and MTS satellite tracking communication systems which currently support deployed U.S. forces worldwide."