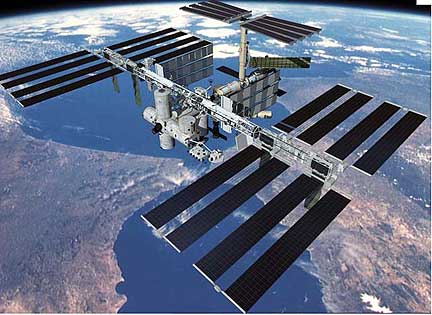 [SatNews] Wouldn't you think when you're 200 miles above Earth that you shouldn't have to 'duck and cover' from flying garbage?...read on...

The six earthlings—three Russians, two Americans, and a Dutchman—aboard the International Space Station were stirred from their slumber Saturday morning to jump into emergency escape pods, once again drawing into focus the growing dangers of hurtling space junk.

The astronauts, orbiting 200 miles above the planet, were told by ground control to scramble into two docked Soyuz spacecrafts in case a piece of a wrecked Russian satellite should smash into the ISS, which could have heavily damaged the platform as both objects were traveling at orbital speeds – 17,500 miles per hour. The emergency was called off after the chunk passed by at an approximate distance of nine miles – which in space terms is a near-miss. "Everything went by the book and as expected, the small piece of cosmos satellite debris passed the international space station without incident,” said a NASA spokesman. Ground controllers did not believe the ISS was in extreme danger, but ordered the emergency maneuver after determining that the trajectories could intersect.

NASA says there are about 22,000 pieces of sizable space junk – primarily bits of old satellites – orbiting the earth and has in the past ordered the ISS crew to adjust the craft's path to avoid collisions. In all, NASA tracks nearly half a million pieces of space junk.

The piece that threatened the ISS Saturday morning came from the 2009 collision of the Iridium communications satellite and the Russian Cosmos 2251.

NASA spotted the latest threat too late for the crew to move the ISS safely out of the way. It was the third time in 12 years that astronauts were ordered to scramble for safety. Last June, a piece of debris came within 1,100 feet of the craft.

NASA said it followed a “precautionary and conservative” approach by ordering the astronauts to enter the escape pods. The astronauts – Russians Anton Shkaplerov, Anatoly Ivanishin, and Oleg Kononenko, Americans Dan Pettit and Dan Burbank, and Dutchman Andre Kuipers – were awakened about an hour early on what was to have been their day off to get into the Soyuz' crafts and close the hatches.

The spacefarers watched through the portholes to see if they could catch a glimpse of the zooming debris. "Nichevo ... Nothing," one of the Russian cosmonauts said.

If the 450-ton ISS had been hit and disabled, the astronauts were prepared to detach and descend back to earth in the capsules. Instead, they climbed back into the ISS and “resumed a normal and relaxing weekend,” NASA spokesman Rob Navias told MSNBC.

In response to concerns from the National Research Council that space junk is posing an increased threat to the earth's critical satellite network and the ISS, spacefaring nations have signed compacts to adopt best practices to better control expired space craft and their inevitable return to earth. About one large piece of space junk falls to earth each year. Just this week, villagers in Siberia reported a large “UFO fragment” falling to earth, even as space experts struggled to confirm its origin.

Researchers are also working on ways to corral space junk while in orbit. One idea, in theory, resembles a sort of space shrimp boat that would use a net to trawl for debris. Other ideas include using lasers to obliterate the pieces, and a Swiss company last month said they are developing a sort of “janitor satellite” to clean up the trash strewn skies.