On January 24, SpaceX carried out a static fire test of their first Falcon Heavy launch vehicle, clearing the way for an upcoming launch. 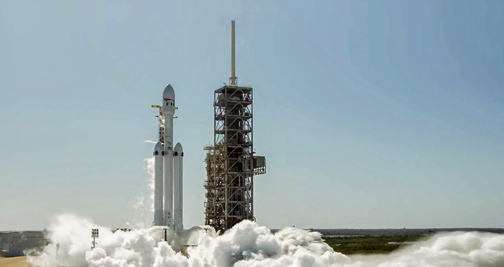 Photo of the Falcon Heavy static fire test at Cape Canaveral is
courtesy of SpaceX.

The rocket fired the engines in the vehicle's three core boosters at 12:30 p.m. Eastern on the pad at Kennedy Space Center’s Launch Complex 39A (LC-39A) in Florida, with the test lasting about 10 seconds, according to observers. The company didn’t immediately release details regarding the 27 Merlin engines' performance in the three boosters.

The company has not yet announced a target launch date for the inaugural launch of the Falcon Heavy, which is the largest U.S. rocket since the Saturn 5. SpaceX currently has scheduled a Falcon 9 launch from nearby Space Launch Complex 40 at Cape Canaveral Air Force Station for January 30.

SpaceX has been testing the Falcon Heavy at LC-39A for the last two weeks, conducting a number of "wet dress rehearsal" fueling tests, addressing any issues that may have presented themselves during these exams. The inaugural launch of the Falcon Heavy is a demo mission without a paying customer, with photos released by SpaceX showing a Tesla Roadster being encapsulated in the rocket’s payload fairing to substantiate Elon Musk's statement the rocket would carry his car beyond Mars.

If that demonstration mission is a success, SpaceX has at least two more Falcon Heavy launches planned for 2018, one being the Arabsat 6A communications satellite and the second the Space Test Program 2 mission for the U.S. Air Force. SpaceX also announced plans to fly a Crew Dragon spacecraft with two passengers on a circumlunar mission in late 2018 using a Falcon Heavy.