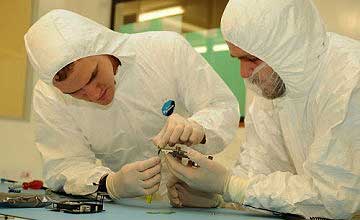 Graduates of Cape Peninsula University of Technology, from left, Reiner Siebrits and Leon Steenkamp work on the satellite.
Photo courtesy of West Cape News.
[SatNews] A mini satellite weighing 1.2 kilograms will be launched from...

...the Cape Peninsula University of Technology (CPUT), South Africa, in November to collect information about space weather. Funded by the Department of Science and Technology, the satellite, named ZACUBE-1, will be South Africa's first nanosatellite running on the same amount of power as is used by a 5-watt light bulb, according to researchers at the CPUT.

Comparing ZACUBE-1 to Sputnik, the first satellite in the world to be launched into space in 1957, lead researcher Robert van Zyl described the nanosatellite as an evolutionary leap in space technology. He said ZACUBE-1 cost much less and was 84 times smaller than Sputnik, tiny enough to be put on the palm of a human hand. The satellite will travel to Russia and ultimately to space where the satellite will be released from its pod and its 10m antennae will be deployed to send information to receiving stations at CPUT and the town of

near Cape Town, according to local newspaper Cape Times.

The satellite will be operational for between two and five years. Researchers expect the satellite to fall to the earth and burn up in about 10 to 20 years. ZACUBE-1 is the result of 18 months of research and development by students and staff from the French South African Institute of Technology at CPUT, according to the report. (Source: allAfrica.com).