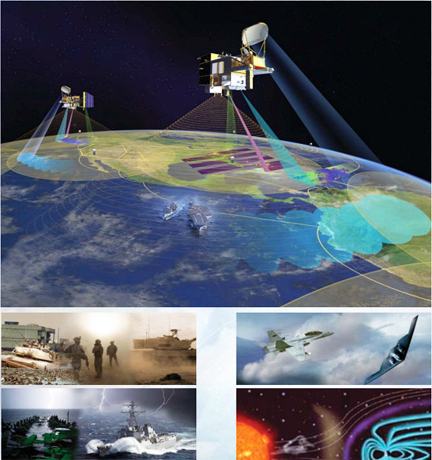 Artistic rendition of the DWSS satellite systems.
An unnamed Pentagon official, who wishes to remain anonymous, has said the Pentagon...

... is about to propose a Northrop Grumman satellite, an Army missile, and a light attack aircraft for the U.S.A.F. be cancelled. Thanks to an excruciatingly austere red pencil attack by the current federal administration on the armed forces, the Defense Weather Satellite System, the Joint Air-to-Ground Missile, and the jet are among the programs proposed for the financial axe. Panetta, the Defense Secretary within the Obama administration, is going to release his budget details later this month.

Funny, but as the DWSS remains in its initial development stages, no real "cost savings" can be attributed to its potential demise. Two satellite purchases were planned by the U.S.A.F. Last May, Northrop Grumman had obtained full authorization to proceed with the project. The initial launch of the satellite was planend for 2018.

According to sources, "a difficult and confusing set of management issues" resulted in the defense appropriations panel for the Senate calling for an end to the program in its 2012 fiscal appropriations bill. Northrop Grumman had no comment and is awaiting a public statement on this possibility by the U.S.A.F.