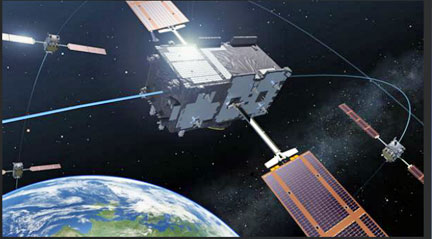 ...the European Space Agency (ESA) ESTEC facility in Noordwijk, the Netherlands, has been declared a full success. The satellites, built by Astrium for validation of the European satellite navigation system Galileo, passed all their milestones. ESA confirmed that the satellites are fully operational after the launch and are capable of fulfilling the intended mission lifetime. With this review, Astrium has demonstrated that the satellites are operating correctly and as predicted in ground-based tests, showing that the satellites fulfil their technical requirements. Routine operations are now able to take advantage of the lessons learnt during the in-orbit testing. 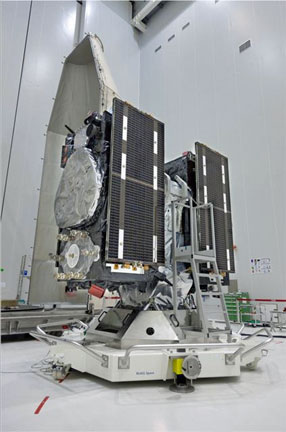 Photo courtesy of ESA/R. Kieffer.
ESA praised the excellent performance of the Astrium IOV satellites and commented that the review was exemplary. Compliments were also received from the European Commission and from the Galileo satellite operations team. With this initial Galileo space segment, Astrium has laid the foundation for the complete high-performance Galileo system. The IOV spacecraft represent the result of an extensive and complex development of the first navigation satellites and related technologies in Europe.

For Astrium, the development of the IOV satellites has a truly European dimension; it has involved hundreds of highly skilled people and 43 companies from 15 European countries.

The Astrium-built Galileo IOV satellites represent the first European navigation satellites with full functionality, initiating the build-up of the operational constellation. The first two IOV satellites were launched on October 21st in 2011 aboard the first Soyuz launch from Kourou. Both are well performing in orbit and have been transmitting all defined signals for more than a year now.

The second pair of IOV satellites was launched on a Soyuz rocket from Kourou on October 12, 2012, following a smooth, completely problem-free launch campaign. The following in-orbit of tests these satellites, reviewing the platform, payload and security issues, were completely by the end of February and showed the satellites and payloads are performing well. This was formally confirmed by the Review Board of April 9th.

The IOV constellation is now in place with four satellites in two orbital planes, allowing the validation of the Galileo system. On 1March 12th, the first precise 3D positioning purely based on the four IOV satellites was derived with the Astrium navigation team in Ottobrunn (Germany) performing related data analysis to verify the Galileo signal and system performance.