Lockheed Martin and the U.S. Air Force Test Pilot School at Edwards Air Force Base, Calif., have demonstrated an autonomous landing of the F-16 Fighting Falcon. This is the first time an F-16 has landed entirely under computer control. 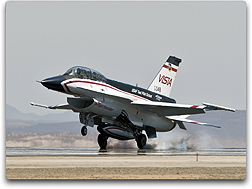 The Autoland demo is thought to set the foundation for consistent, repeatable, and controlled automatic landings of the F-16 in various wind conditions and airfield situations. This Lockheed Martin-developed technology has broad applications for both manned and unmanned aircraft, says a company representative. "The demonstration of an autonomous landing of an F-16 is evidence that Lockheed Martin is prepared to successfully implement autonomous control of Unmanned Combat Air Vehicle (UCAV)-type aircraft," says Frank Cappuccio, Lockheed Martin's executive vice president and general manager of Advanced Development Programs and Strategic Planning. "Such technology, in concert with the skill and experience of today's warfighter, presents a formidable force against existing foes and provides a basis for further developing manned and unmanned vehicles that can meet the challenges facing the warfighters of tomorrow."

The Autoland sequence is initiated during flight by an on-board safety pilot. Once the pilot moves to "hands-off" aircraft controls, the F-16 is controlled by an onboard computer and guided through several phases of the landing sequence, culminating in a final approach to the runway touchdown point, says a representative. The computer uses Lockheed Martin-developed algorithms to control the F-16's attitude, glide slope, airspeed, and descent rate via throttle and flight control inputs until the aircraft comes to a stop on the runway. The Air Force Test Pilot School provided flight test resources for the demonstration, including the VISTA/F-16 (Variable Stability In-flight Simulator Test Aircraft), Calspan Corporation flight test safety pilots (under contract to the Test Pilot School), and testbed support and facilities. Lockheed Martin Aeronautics and the Air Force Test Pilot School performed all activities in partnership, from initial planning through implementation and test execution.