[SatNews] The design of a new, heavy-lift rocket and a new crew capsule has been selected... 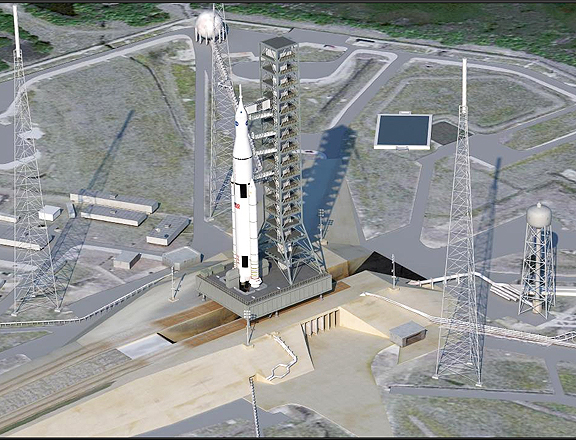 Artist Concept of SLS on Launchpad

The Space Launch System, or SLS, will be designed to carry the Orion Multi-Purpose Crew Vehicle, as well as important cargo, equipment and science experiments to Earth's orbit and destinations beyond. Additionally, the SLS will serve as a back up for commercial and international partner transportation services to the
International Space Station.

NASA has selected the design of a new Space Launch System that will take the agency's astronauts farther into space than ever before, create high-quality jobs here at home, and provide the cornerstone for America's future human space exploration efforts. This new heavy-lift rocket-in combination with a crew capsule already under development, increased support for the commercialization of astronaut travel to low Earth orbit, an extension of activities on the International Space Station until at least 2020, and a fresh focus on new technologies-is key to implementing the plan laid out by the bipartisan 2010 NASA Authorization Act, which was signed last year. The booster will be America's most powerful since the Saturn V rocket that carried Apollo astronauts to the moon and will launch humans to places no one has gone before. 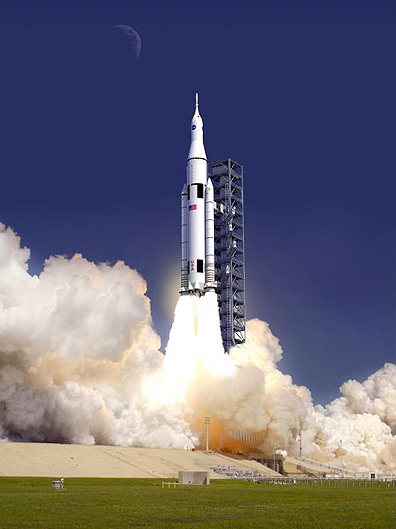 Artistic concept of SLS launching
This launch vehicle decision is the culmination of a months-long, comprehensive review of potential designs to ensure the nation gets a rocket that is not only powerful but also evolvable so it can be adapted to different missions as opportunities arise and new technologies are developed. The SLS will carry human crews beyond low Earth orbit in a capsule named the Orion Multi-Purpose Crew Vehicle. The rocket will use a liquid hydrogen and liquid oxygen fuel system, where RS-25D/E engines will provide the core propulsion and the J2X engine is planned for use in the upper stage. There will be a competition to develop the boosters based on performance requirements.

The decision to go with the same fuel system for the core and the upper stage was based on a NASA analysis demonstrating that use of common components can reduce costs and increase flexibility. The heavy-lift rocket's early flights will be capable of lifting 70-100 metric tons before evolving to a lift capacity of 130 metric tons. The early developmental flights may take advantage of existing solid boosters and other existing hardware. These flights will enable NASA to reduce developmental risk, drive innovation within the agency and private industry, and accomplish early exploration objectives. NASA elected to initiate a competition for the booster stage based on performance parameters rather than on the type of propellant because of the need for flexibility. The specific acquisition strategy for procuring the core stage, booster stage, and upper stage is being developed and will be announced at a later time.