A Smashing Show For China's Tiangong-1 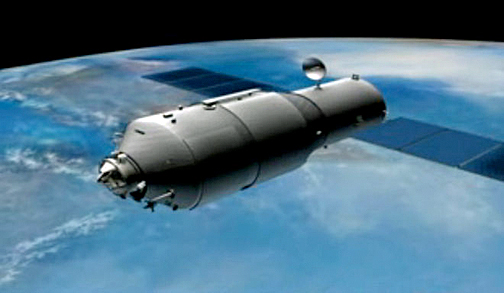 After having spent five years in space, returning to Earth would seem to be a good experience—except that such does not hold true for China's first space lab, Tiangong-1, which will have a real impact somewhere on the globe.

Launched by China in 2011, the orbiting lab suffered function failure and had to be scrapped. The lab remains intact and is orbiting at 370 kilometers. The Chinese deputy director of their manned space engineering office had indicated that the spacecraft had completely fulfilled this historical mission and that most of the parts of the lab will be burned up and destroyed as the pieces enter Earth's atmosphere.

However, according to a renowned Harvard astrophysicist, Jonathan McDowell, the probability is that China has now lost control of their space lab and there is no steering to move the unit and there will be no indication as to where the remnants of Tiangong-1 will come down onto the planet. Many of the lab's parts are quite dense and they simply will not burn up on reentry to Earth.

Known as "Heavenly Palace," the space lab enabled China to become the third nation in the world to send such a workshop into space, where the unit was to handle research and orbital docking tests. When Tiangong-1 was launched, China's plans at that time were to build a complete space station by the year 2020.

China's Tiangong-2 was launched in September of this year.