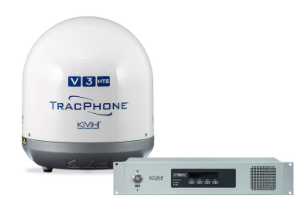 The TracPhone V3-HTS’s fast data speeds, combined with its diminutive size, make Internet connectivity and HD-quality streaming available aboard smaller powerboats and sailboats along with commercial vessels, such as workboats and offshore fishing boats, that do not have room for a larger satellite communications antenna.

KVH designed and engineered the TracPhone V3-HTS specifically for KVH’s mini-VSAT BroadbandSM HTS network. This advanced maritime network offers speed and coverage using new next-generation high-throughput satellites (HTS) from Intelsat’s global network with additional satellite capacity from SKY Perfect JSAT, all of which is fully integrated under the IntelsatOne Flex for Maritime platform. KVH is the maritime VSAT market share leader by fielded units, according to an independent industry report by Euroconsult.

The TracPhone V3-HTS is the second HTS antenna design from KVH, which introduced the 60 cm diameter Ku-band TracPhone V7-HTS last year. During the development of both antennas, KVH worked closely with satellite operator Intelsat, which recently upgraded its IntelsatOne Flex platform to support smaller antennas, in anticipation of the release of KVH’s 37 cm terminal. IntelsatOne Flex is a managed service that offers multi-layered global coverage by leveraging Intelsat EpicNG high-throughput satellites (HTS) and select wide beams. The TracPhone V3-HTS is manufactured by KVH at its headquarters in Middletown, Rhode Island.

Brent Bruun, KVH’s chief operating officer. added that ensuring that boaters and mariners around the world can experience the benefits of connectivity at sea has been a driving force for KVH for many years, and the new TracPhone V3-HTS makes that possible for more types of boats than ever before.  KVH streamlines the entire process of getting broadband on the boat by offering monthly airtime and value-added services to create an end-to-end solution unmatched by other marine VSAT providers.

Additional features of the TracPhone V3-HTS include: