Alliant Techsystems (NYSE: ATK) has successfully completed testing for a new class of hypersonic propulsion systems that will enable High Speed Strike Weapons and Unmanned Aerial Vehicles to travel long distances at velocities more than 5x the speed of sound. 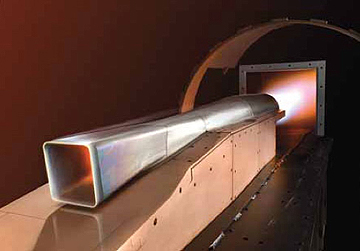 The most recent tests involved flight-weight, fuel-cooled Thermally Throated RamJet (TTRJ) technology built with conventional materials and manufacturing processes, and burning readily-available JP-10 jet fuel. This long-duration testing was funded by the U.S. Air Force and conducted at ATK's Ronkonkoma, N.Y. facility. This latest test series incorporates lessons learned during the design, manufacture and testing that has been conducted over the last three years. The resultant ALRJ-51-4 configuration has been further simplified over previous builds and has already demonstrated performance levels meeting or exceeding requirements. In this test series, ATK ran the fuel-cooled hardware through multiple two-minute long test periods to demonstrate full thermal equilibrium, thus ensuring all durability requirements can be met for both single-use and reusable flight systems. The flight-weight engine components have now accumulated more than 44 minutes of hot operating time. After being launched from an aircraft or from the surface, the TTRJ-powered vehicle would be rocket-boosted to high speed, enabling the ramjet to ignite. In previous testing, the ATK engine demonstrated ignition at Mach 3 conditions and robust operability up through Mach 5.5.

The ALRJ-51-4 combustor is sized to fit the USAF X-51B flight test vehicle developed by ATK and Boeing (NYSE: BA). The team completed a Preliminary Design Review in 2007, which indicated a good match between the engine and air vehicle. Due to the engine's light weight, volumetric efficiency and minimal subsystems requirements, integration into the X-51 airframe frees up vehicle volume for fuel, payload and potentially a recovery system. The resulting configuration presents a direct path toward a robust weapon technology demonstrator leading to a near-term operational, high speed strike weapon concept with the ability to traverse over 500 nautical miles in ten minutes. The ALRJ-51-4 combustor hardware is currently being integrated with an X-51B inlet and nozzle system to prepare for integrated engine testing this year. A major benefit of the ATK engine technology is its scalability and adaptability to a wide variety of applications. Scalability studies conducted by ATK for the USAF Robust Scramjet program are evolving the tools and techniques necessary for rapid development of derivatives suitable for a range of vehicles including missiles and reusable UAV's.