[SatNews] Even as Indian space scientists are working on the partial restoration of communications satellite INSAT-4B, they are worried due to the recurring failure of their satellites due to power supply glitches.

The reason may be the failure of imported components, according to Indian Space Research Organisation (ISRO) scientists.

ISRO has already lost two of its satellites—Chandrayaan in 2009 and INSAT-2D in 1997—and now, it appeares as though the INSAT-4B has been partially lost. This is a big setback for the ISRO, which is attempting to gain a foothold in the global communications satellite building market, especially when considering the failure of the W2M satellite that was co-built by ISRO and EADS Astrium for Eutelsat Communications in January. 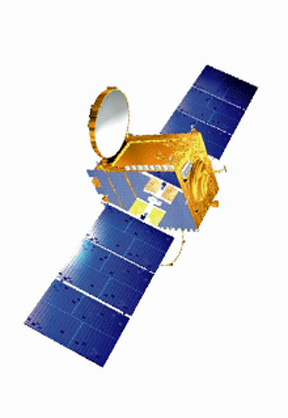 Artistic rendition of the
INSAT-4B satellite.
Image courtesy of ISRO.

The DC to DC converter in the Chandrayaan satellite failed, which in turn heated up other components/equipments onboard the satellite and halted their proper functioning. This ultimately forced the ISRO to junk the mission well ahead of its planned life expectancy of two years. Another ISRO official, on condition of anonymity, added, "The component is imported, as its size is small, whereas the Indian built one is larger. In space, every additional gram is important. The problem with INSAT-4B is similar to the problem that afflicted W2M satellite."

The 3.4-ton W2M, the heaviest built by ISRO, launched by Ariane5 rocket from French Guyana in December of 2008, developed a problem in its power supply sub-systems when it was being transferred to its intended orbit from the test orbit and Eutelsat later said the satellite was not available for service. According to ISRO, the problem with INSAT-4B is a power anomaly in one of the satellite's two solar panels—six Ku- and six C-band transponders were switched off so that there is enough power for the remaining 12 transponders (six Ku- and six C-band). ISRO officials said the agency imports the solar cells to make the solar panels that supply power to the satellite. Queried about ISRO tightening its quality control processes, an official said the agency is now focusing on the component quality.

For ISRO, as for any satellite operator, the loss of a satellite means a lessening of revenue opportunities, that cost being higher than the initial cost of the satellite and the rocket that launched it. The INSAT-4B, launched in March of 2997, is the second of the ISRO's INSAT 4 series of spacecrafts and is configured with exclusive communication payloads to provide services in Ku- and C- frequency bands. The satellite is co-located with INSAT–3A at 93.5 degrees East.