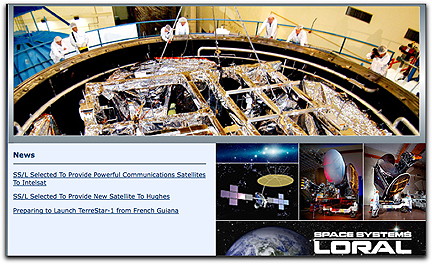 Space Systems/Loral (SS/L), a subsidiary of Loral Space & Communications (Nasdaq:LORL) has been awarded a contract to provide two new satellites to Intelsat.

The two satellites, Intelsat-19 and Intelsat-20, will be among the most powerful FSS satellites ever built with unprecedented capacity to provide services for broadband, video, and voice applications. Intelsat-19 and Intelsat-20 will replace existing satellites that currently provide services to five continents and will offer services for broadcast television and telecommunications. The satellites also will have the capacity to support mobile communications and higher data rate network services.

Intelsat-19 is the 36th satellite that Space Systems/Loral will provide to Intelsat and it is scheduled for launch in 2011. This satellite will replace the Intelsat-8 satellite at 166 degrees East. The satellite's C-band capacity will provide enhanced distribution of content throughout Asia-Pacific with reach to the Western United States. The increased Ku-band capacity, optimized to distribute services to Australia, will also support demand for mobility and enterprise network applications across the Asia-Pacific region.

Intelsat-20 is the 37th satellite that Space Systems/Loral will provide to Intelsat and it is scheduled for launch in 2012. The Intelsat-20 satellite will replace the Intelsat-7 and Intelsat-10 satellites, which are co-located at 68.5 degrees East. The new satellite's C- and Ku-band payload is optimized for high-power distribution of video, voice and data network services. Both satellites are built on the highly reliable Space Systems/Loral 1300 satellite platform, which provides the flexibility for a broad range of applications. They are designed to provide service for at least 15 years. With Intelsat-19 and Intelsat-20, Space Systems/Loral will have a total of four Intelsat spacecraft in its manufacturing facility with a record breaking 288 36-MHz transponder equivalents of capacity under construction for Intelsat.