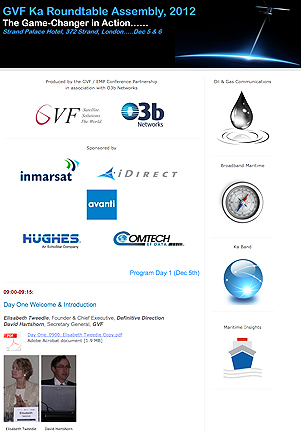 ...in London on December 5th and 6th, 2012, the satellite industry has now called for a further platform to facilitate extended industry and end-user dialogue about high capacity and high throughput satellite systems, new ground infrastructures, and advanced networking applications. Announcing the dates of May 21st and 22nd, 2013, for the GVF High-Capacity Satellite Roundtable Assembly, to take place in Washington DC, David Hartshorn, Secretary General of GVF said, “The GVF’s London Roundtable Assembly amply illustrated the continuing need for such platforms, as opportunities to disseminate information about the technology of new broadband satellite systems and services, as opportunities to explain the new generations of highly cost-effective services that the technology is enabling, and as opportunities to continue to evaluate the high capacity/high throughput business case. We look forward to taking the stakeholder dialogue further, in Washington DC, and beyond.”

The GVF Ka Roundtable Assembly 2012: Satellite Service Provision Game-Changer in Action heard analysis by Northern Sky Research (NSR) indicating that global on-orbit high throughput satellite (HTS) supply will conservatively reach 1.6 Tbps in 2021, up from 162 Mbps in 2011, and over the same ten-year period, global HTS capacity demand will increase 17x. Global HTS capacity leasing revenues will exceed US$2 billion in 2021, up from US$163 million as of the end of 2011.

The London event, the first of a planned global series, was held against the backdrop of the accelerated dynamics of the day-to-day realities of contemporary developments in broadband satellite communications, and was supported by such leading satellite industry technology and service providers as O3b Networks, Inmarsat, iDirect, Hughes, Avanti Communications, and Comtech EF Data. The Roundtable Assembly program series will continue to make the major contribution to the global discussion of the paradigm leap in the economics of satellite communications, with new technology roll-out and innovative services provision being built on the ever-increasing commercial availability and usage of high capacity/throughput satellite technologies.

The program of speakers at the London event addressed an audience of more than 100 individuals representing satellite industry and end-user stakeholders, the latter including such a wide variety of user interests as the oil & gas industry, the wider telecoms sector, aerospace/airline interests, broadcasters, and the financial sector. In addition, a wide range of organisations from the Value-Added Reseller market were in attendance. The event also featured speaker support from the European Space Agency, from OfCom, from firms of telecommunications attorneys, satellite industry analysts, and regulatory experts.

The full range of organizations registered for the event may be viewed on the Roundtable Assembly homepage at .