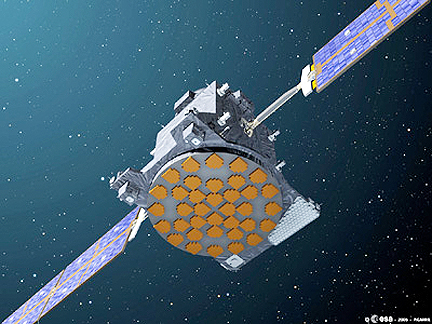 ...achieved a GPS position fix at 23,300km altitude—the first position fix above the GPS constellation on a civilian satellite. The SGR-GEO receiver is collecting data that could help SSTL to develop a receiver to navigate spacecraft in Geostationary orbit (GEO) or even in deep space. GPS is routinely used on Low Earth Orbit (LEO) satellites to provide the orbital position and offer a source of time to the satellite. Spacecraft in orbits higher than the 20,000km of the GPS constellation, however, can only receive a few of the signals that “spill over” from the far side of the Earth, meaning that the signals are much weaker and a position fix cannot always be secured.

With the support of the European Space Agency (ESA) and the ARTES 4 program, SSTL included the SGR-GEO receiver on the GIOVE-A satellite to prove that a receiver could achieve a position fix from a higher orbit. The SGR-GEO is adapted from SSTL’s SGR range of receivers and incorporates a high-gain antenna and a precise oven-controlled clock. It will demonstrate special algorithms to allow reception of weak signals and an orbit estimator intended to allow a near continuous position fix throughout orbit.

The experimental GPS receiver onboard GIOVE-A has been inactive for 6 years while the satellite has been used for its primary purpose of transmitting prototype Galileo signals. GIOVE-A’s retirement in June 2012 has allowed the commissioning of the experiment and is now providing valuable data to SSTL and ESA in support of the future use of spaceborne GNSS receivers at GEO altitudes. Engineers at SSTL will continue operations, testing out, tuning and improving the receiver software onboard GIOVE-A to achieve the best possible performance.