[SatNews] Astrium is pushing ahead with the preparation of CarbonSat, a new...

...climate satellite for the European Space Agency (ESA), over the next 22 months. In early April 2012, ESA announced its decision to award Astrium a contract to define the CarbonSat satellite. Under Astrium’s lead, an international team of engineers will move forward consolidating the various components that make up the CarbonSat satellite, which will measure the global concentration and distribution of the two most important greenhouse gases—carbon dioxide (CO2) and methane (CH4)—with unprecedented accuracy, providing climate scientists with essential data for climate analysis and for refining climate simulation computer models. CarbonSat will provide measurement data with a spatial resolution better than 2 x 2 km. For the first time, this should enable scientists to quantify localized sources of CO2. The mission will have the capability to achieve similar results for methane by quantifying emissions from sources such as landfill sites and large oil processing complexes, as well as supplying data on the little-researched issue of methane emissions from the world’s oceans. 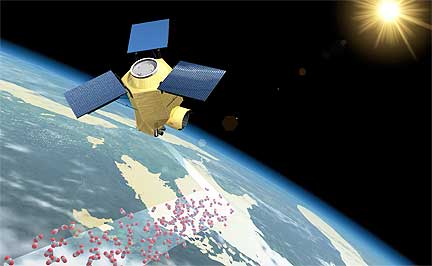 An artistic rendition of the CarbonSat satellite,
courtesy of Astrium.

CarbonSat is vying to be the eighth Earth Explorer mission of ESA’s Earth observation program. It is designed to continue the process of tracking greenhouse gases from space initiated by the Envisat satellite´s Sciamachy spectrometer developed by Astrium. The Company was also the prime contractor for Europe’s largest environmental satellite, Envisat, which celebrated its 10th anniversary on March 1st of this year. In addition, Astrium is also the prime contractor for four of the six ESA Earth Explorer missions—Cryosat-2, Swarm, Aeolus and EarthCARE, as well as playing a major role in the other two missions, GOCE and SMOS. Astrium is also studying the MicroCarb mission for CNES, the French space agency, with the aim to assess CO2 fluxes between carbon sources and sinks and improve our knowledge of carbon sinks.