[SatNews] The launch of Russia's "Nauka" (Science) multirole laboratory module (MLM) for the...

...International Space Station has been set back from the end of this year to the end of next year, due to technological and organizational problems at the Khrunichev Space Center, the head of Russia's Energia space corporation Vitaly Lopota said on Tuesday. The launch of the Nauka was initially slated for the first half of 2011, but has since been repeatedly delayed. The module is being constructed by Khrunichev and RKK Energia.

"The MLM should have flown (to the ISS) this year. However, technological and organizational problems at the Khrunichev Center, which we could not sort out in time due to the amount of work needed, led us to 'move the launch to the right.' Today, the recalculated schedule for the launch of the module is the fourth quarter of 2013," Lopota said. Khrunichev is working on the flight-standard module, and is building the main hull and fitting it out with its equipment, he said. The flight-ready module is due to be delivered soon to RKK Energia. "We are doing everything possible with Khrunichev to offset these delays," Lopota added.

The Nauka MLM is one of the Russian modules of the International Space Station (ISS), and is based on the functional cargo block 2 (FGB-2), a back-up for the Zarya module, ordered by Roscosmos, the Russian space agency. The module will be fitted with a European robot manipulator arm, specially made for working with the Russian section of the ISS.

Work on the MLM began in 1995, together with work on Zarya, the first ISS module. In order to simplify the configuration of the Russian segment of the ISS, the Nauka module was based on the FGB-2, which was intended to develop the Russian section of the ISS. MLM will carry out commercial projects with the aim of attracting private finance, including investment for developing products. MLM will also carry out a range of other functions including life-support, steering the ISS with an attached motor, docking with cargo vessels and fuel transit from Progress cargo ships to the Zvezda module. 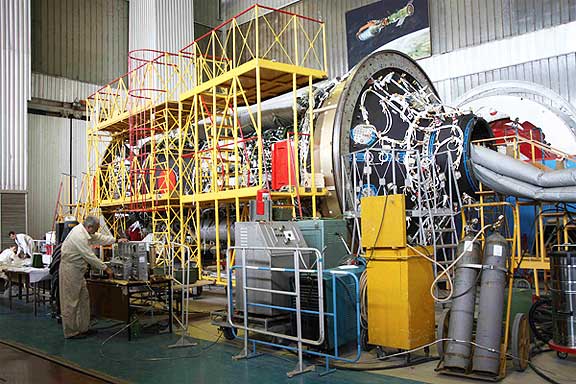 Using special cameras on the sides of the MLM and ERA, it will be possible to move equipment and stores from the air-tight sections of the station to its outer surface without the necessity of making exits into open space. MLM will have space for three astronauts to work in. MLM will be attached to a part of the Zvezda module, replacing the existing Pirs module, which will be discarded. (Source: RIA Novosti)