SUIRG's Surge With Board of Directors Announced

SUIRG is an international assembly of parties with representation from the private and public sector organized to combat the increasing and costly problem of satellite RF interference. Members disseminate information and actively pursue programs to reduce radio frequency interference incidents.

Formed more than ten years ago as an informal group working to reduce radio interference, SUIRG incorporated as a 501(c) (6) trade association in September 2003. The Group counts nearly 40 members from 19 countries, comprised of satellite operators, users, uplinkers, service providers, equipment vendors, and other organizations with a stake in combating radio frequency interference. SUIRG also collects interference incident data from satellite operators on its web site to clearly define specific problem areas that require focus and remedies to reduce the number of incidents. SUIRG has just announced the election of new officers and members of its Board of Directors during its annual satellite interference conference held earlier this month in Cairo, Egypt.  Re-elected to the SUIRG Board of Directors for 2009 were: The Board also voted in two new members for 2009:


Select this image for more info... 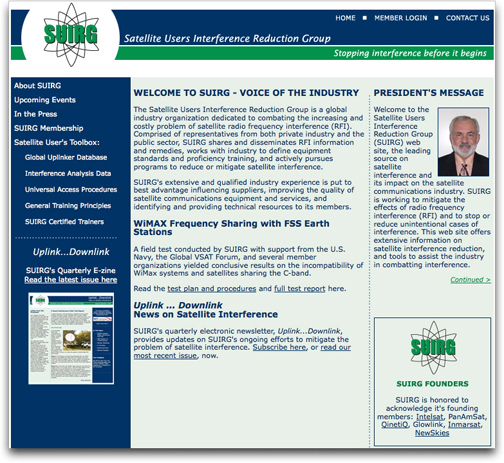