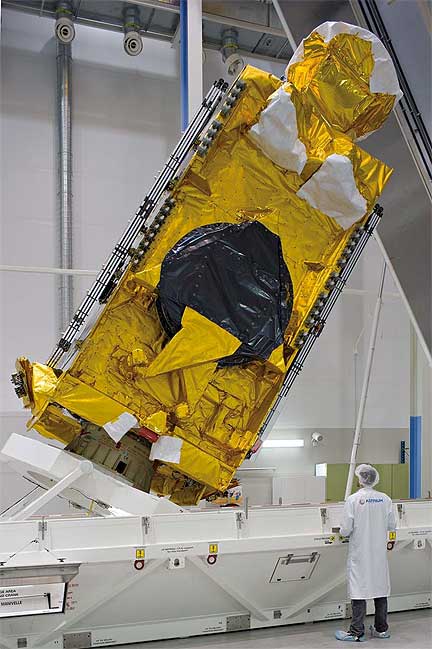 ...to be launched on a Proton launcher from Baikonur in Kazakhstan. Comprising two satellites and a ground segment, the Yahsat project is a complete commercial and military satellite communications system built by Astrium and Thales Alenia Space (TAS) for the Al Yah Satellite Communications Company (Yahsat). The Yahsat system will offer innovative commercial solutions, including HDTV broadcasting, internet trunking via satellite, corporate data networks, and internet services for public and private users, as well as secure communications.

Astrium is responsible for the final integration of the two satellites and for delivery in orbit. Thales Alenia Space provided the payloads and is responsible for the space segment, including the launch of the satellites. Astrium Services, with its partner Thales Alenia Space, is responsible for the ground segment, which comprises a network of ground terminals, and for a management system which provides remote control of all system hardware. Astrium Services, in association with Thales Communication and Security, is also in charge of operating this system, providing ground segment maintenance and of training Emirati operators over a five-year period.

Y1B will deliver communications in Ka-band for commercial and governmental users. It will provide high-data rate internet services for public and private users in the Middle East, Africa and South West Asia with state-of-the-art Ka-band multi spot-beam technology, achieving cost-effective bandwidth supply through 61 narrow spot beams. The governmental mission will bring a substantial increase in the total capacity available for the UAE secure communications over the Middle East, complementing the Y1A satellite.

With a launch mass of approximately 6,000 kg and a spacecraft power of 14 kW, Y1B has a design lifetime of more than 15 years. Like Y1A, Y1B was integrated by Astrium on a Eurostar E3000 platform and tested at its Toulouse site. More than 50 Eurostar satellites have now been launched and have accumulated over 400 years of successful in-orbit operation. Both commercial and military Ka-band payloads were built with state-of-the-art Ka-band multi spot-beam technology from Thales Alenia Space. Early orbit phase operations will be conducted by Astrium from its spacecraft control centre in Toulouse.