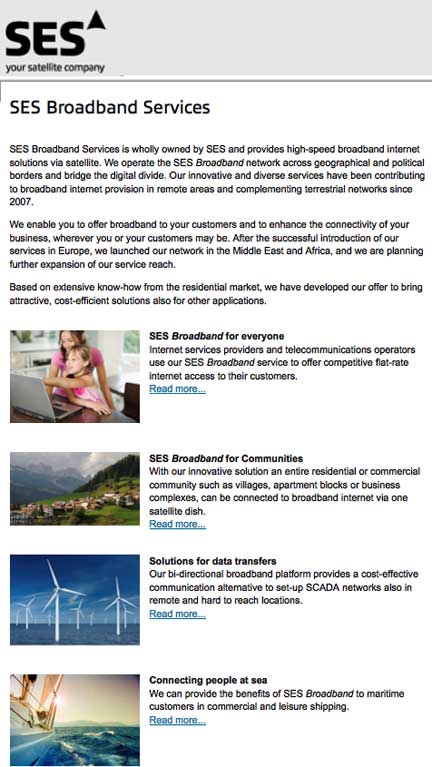 ...its satellite broadband service, SES Broadband, in Ka-band in November 2012. The new service will offer download speeds of up to 20Mbit/s and upload speeds of up to 2Mbit/s. It will be marketed via SES’ long-term partners NordNet, Vivéole and WIBOX to end-consumers in France. SES Broadband in Ka-band will be available pending the launch and beginning of operations of SES’ ASTRA 2F satellite. The satellite is currently scheduled for launch on September 21, 2012 and will be located at the orbital position 28.2 degrees East.

SES has signed a cooperation agreement with Gilat Satellite Technologies and Newtec to set up the hub infrastructure and to deliver the end-user terminals for the Ka-band service to its customers. Patrick Biewer, Managing Director of SES Broadband Services, said, “With ASTRA 2F and the subsequent launches of ASTRA 2E, ASTRA 5B and ASTRA 2G in 2013 and 2014, we will be able to further expand our satellite broadband service in Europe with the additional Ka-band capacity on our fleet.”

SES’ service providers welcome the arrival of the Ka-band based broadband service. Francis Piet, CEO of NordNet, said: “The new service will further increase the attractiveness of satellite broadband, which is now five times faster and half the price than it was in 2008.”

Alexandre Séménadisse, CEO of Vivéole, said, “Vivéole has been committed to bridging the digital divide since 2005. As a long-standing partner of SES, we will soon be able to offer even better solutions to a larger customer base.”

Thomas Gassiloud, President of WIBOX, said, “The fact that satellite technology has constantly developed allows us to meet the growing demand for broadband services in the regions. We can now offer services close to the speed of ADSL connections and traffic volumes offering unprecedented freedom of choice for our customers.”