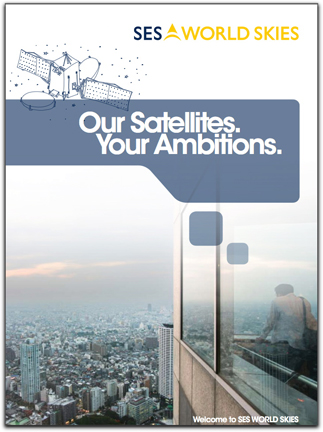 Company brochure...
Consistent with its role within SES as the provider of global and American satellite capacity, SES WORLD SKIES, a division of SES S.A. (Euronext Paris and Luxembourg Stock Exchange: SESG), has unveiled the Company's updated strategic satellite fleet development plan, as well as a new naming convention for future additions to the fleet that will leverage SES’ global reach and powerful brand. Three new advanced satellites in various stages of development and construction by Orbital Sciences Corporation are intended to replenish and expand SES WORLD SKIES’ North American fleet and will be named SES-1, SES-2 and SES-3.

SES-1 is set for launch in the spring of 2010 and will replace AMC-2 and AMC-4 at the 101 degrees West orbital slot. Further information on launch dates and slots for SES-2 and SES-3 will be published shortly.

NSS-14, currently under construction with Space Systems/Loral and scheduled for launch in Q1 2011, has been renamed SES-4. It will replace NSS-7 and provide incremental capacity over the Atlantic Ocean with comprehensive coverage of the Americas, Europe, Africa and the Middle East. NSS-7 will then move to replace NSS-5 at 340 degrees East.

The C-band payload of the SIRIUS 5 spacecraft, also under construction with Space Systems/Loral and scheduled for launch in Q4 2011, will be named SES-5 and reside together with the Ku-band payload of SIRIUS 5 at 5 degrees East.

The NSS-806 replacement satellite, under negotiation with vendors, will be named SES-6.