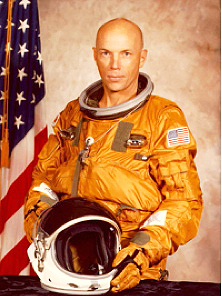 In a feature published on mlive.com, written by Jef Rietsma, the feature opens with "An old photo of a shirtless, diapered boy examining an insect seemed an unlikely visual to begin a speech by a NASA veteran with Hall-of-Fame credentials. But after the chuckling from an audience of about 100 people died down, Story Musgrave elaborated on the black-and-white picture as he spoke in Kalamazoo, Michigan, last Sunday on the 20th anniversary of the Hubble telescope launch.

“There it is … the posture of exploration,“ he said. “That was me about 72 years ago growing up on the farm and I was in my own world.” Musgrave, 74, said his desire to explore and be curious were attributes he had from a young age, as the photo shot outside his childhood home in Stockbridge, Massachusetts, confirmed. Exploration and curiosity would be key traits that eventually led Musgrave to careers as a mathematician, a surgeon and a 30-year run with NASA. 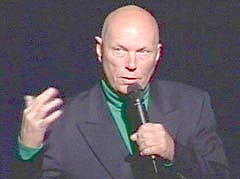 Story Musgrave
Musgrave, brought to the event by the Kalamazoo Astronomical Society for National Astronomy Day 2010, spent Saturday afternoon signing autographs and talking to guests at the Kalamazoo Valley Museum. His 90-minute presentation took place later at Western Michigan University’s Fetzer Center. It was during his tenure with NASA, which started in 1967, that Musgrave played key roles in the development of the Skylab space mission and, starting in 1975, the Hubble Space Telescope project. Musgrave noted that it was a coincidence he was in Kalamazoo on the 20-year anniversary of Hubble’s launch into orbit. In an interview prior to his presentation, Musgrave talked about NASA and its place in the world 50 years ago and today. He said the agency in the 1960s defined a can-do spirit in a manner that Musgrave said he doesn’t see today.

“Today’s program, what is the current administration proposing to get NASA access into space? It’s to think about a booster for five years and then make some decision about it,” Musgrave said. “Fifty years later, when we know the technology, we’ve got the infrastructure and we’ve got everything … we’re going to sit around and think about it for five years and then come up with some decision? If you look at every aspect of the current administration’s proposals for space, it’s afraid. It’s afraid to commit, it’s afraid to do anything,“ he said. “We’re not going to launch anything, we’re not going to build anything, we’re not going to do anything. We were afraid 50 years ago, but we had the will and the courage to move forward and it was simply ’Do it,’ and we did it.“

Musgrave said the 1960s was the most innovative decade in the history of technology, due to the country’s space program. Technology doesn’t happen just for the sake in a vacuum, he contends. Musgrave was inducted into the Astronaut Hall of Fame at the Kennedy Space Center in 2003.