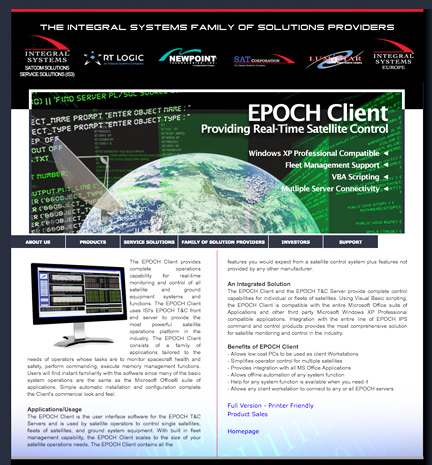 Integral Systems, Inc. (NASDAQ: ISYS) has announced the Company has been selected by Intelsat to provide its EPOCH Integrated Product Suite (IPS) satellite command and control software to manage Intelsat’s newest satellites – Intelsat 21 (IS-21) and Intelsat 22 (IS-22) satellites. These satellites are Boeing’s new mid-power version of the Boeing 702 (702MP) satellite bus. The contract includes options to support additional Boeing 702 satellites. In addition to the Boeing satellites, Intelsat will use Integral Systems’ EPOCH IPS as the command and control platform for three Loral 1300 satellites that it will operate for third parties. These third party satellites will be operated by Intelsat from its east and west coast control centers.

With the addition of these EPOCH IPS operated satellites to Intelsat’s fleet, Intelsat has become the largest user of EPOCH IPS worldwide. ”We have been extremely pleased with the ability of Integral Systems and its EPOCH IPS to provide us a flexible and rapid solution to meet our needs for command and control of various satellites platforms. It’s clear that the team at Integral Systems takes great pride in producing a world-class TT&C solution,” said Tobias Nassif, Vice President of Satellite Operations and Engineering at Intelsat.

“The selection of Integral Systems and EPOCH IPS by Intelsat illustrates its continued confidence in our ability to address its operations needs for not only Intelsat’s satellite fleet, but also for the other satellite owners for whom Intelsat provides operations support,” said Mark Schmitt, Vice President of American Operations at Integral Systems. “EPOCH IPS was specifically designed to be able to easily support our customers as their requirements and needs increase. Its open architecture, inherent flexibility and ease of use make it the ideal choice for customers operating a few satellites or multiple constellations.”

The Integral Systems family of solution providers will be exhibiting at the Satellite 2011 Conference taking place at the Walter E. Washington Convention Center in Washington D.C., March 15 through 17. Please visit booth #557 for more information.