[SatNews] According to RIA Novosti, Russia's projected manned spacecraft capable of flights to the moon will not...

...fly until 2018, the head of Russia's space agency, Roscosmos, Vladimir Popovkin, said on Wednesday—that's at least two years later than the previous projected flight date of 2015-16. "We are thinking of higher [compared to the International Space Station] orbits, and flights to the moon, and developing the technology to fly to Mars," he said. "So we are developing a future system, first of all, of course, the pressurized, launchable module," he said. Popovkin said a new six-seat ship could be adapted for a variety of missions—"maybe just long automated missions, or moon missions, or to a space station between Earth and the moon, or beyind the moon," he said. It would, however, "not immediately be a reusable system," he noted.

First, the developers will have to work out the ship's layout, then test whether the module is safe for "reentry to Earth...at twice space speeds, which is a completely different stress," he added. Developing a reusable craft depends "primarily on thermal-protective coatings, and we have different approaches to solving that issue," he said. 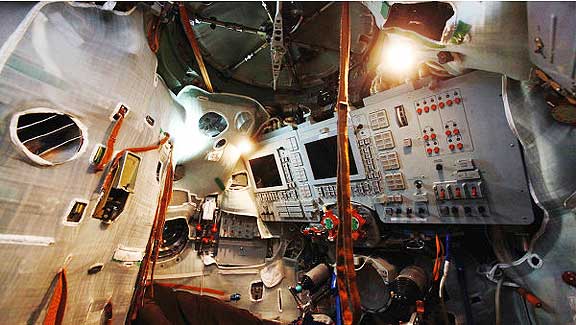 Russia's projected manned spacecraft capable of flights to the moon will not fly until 2018—Image © RIA Novosti. Mikhail Fomichev

If a heavy rocket launch from the Vostochny Cosmodrome in the Amur Region, due to be complete by 2015, is not ready in time, initial flight trials could be completed with a pilotless version on a Zenit rocket from the existing Baikonur Space Center in Kazakhstan, he said. The new piloted spacecraft will replace the aging Soyuz craft on trips to the International Space Station as well as the moon.

Russia's RKK Energia space corporation won a tender in 2009 for development of the future piloted spacecraft, capable of being built in several variants, and capable of flying Earth and near-moon orbits, as well as picking up discarded satellites and large fragments of space junk. The new ship will be capable of landing with precision in an area just one-tenth the size of the current Soyuz, which uses a parachute system to land.