Deep Space Industries... Mine, Mine, Mine... (Technology)

[SatNews] The asteroid making an extremely close pass of Earth this week could be worth up to...

...$195 billion in metals and propellant, if it were in a different orbit, Deep Space Industries (DSI) announced today. Unfortunately, the path of asteroid 2012 DA14 is tilted relative to Earth, requiring too much energy to chase it down for mining. Sending fuel, water, and building materials into high Earth orbit costs at least $10 million per ton, even using new lower-cost launch vehicles just now coming into service.

“Getting these supplies to serve communications satellites and coming crewed missions to Mars from in-space sources like asteroids is key—if we are going to explore and settle space,” said Rick Tumlinson, Chairman of DSI. “While this week’s visitor isn’t going the right way for us to harvest it, there will be others that are, and we want to be ready when they arrive.” 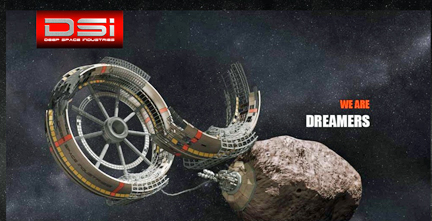 How valuable might such an asteroid be—were it harvestable? According to DSI experts, if 2012 DA14 contains 5 percent recoverable water, that alone—in space as rocket fuel—might be worth as much as $65 billion. If 10 percent of its mass is easily recovered iron, nickel and other metals, that could be worth—in space as building material - an additional $130 billion. If the advent of reusable launch vehicles causes future prices to fall to 20 percent of today’s levels, an asteroid the size of 2012 DA14 would still be worth $39 billion, and the cost of launching hardware to retrieve and process it would be much lower.

“Even with conservative estimates of the potential value of any given asteroid, if we begin to utilize them in space they are all the equivalent of a space oasis for refueling and resupply,” said Deep Space CEO David Gump. “Yet we know very little about most of them. That’s why Deep Space is starting off with a prospecting campaign using very affordable cubesat technologies and hitching cheap rides to space as secondary payloads on the launch of large communications satellites.”

While its trajectory past Earth is known with precision, almost everything else about the rock is uncertain. It could mass as little as 16,000 tons or as much as one million tons. The great range stems from uncertainties about its diameter—from 25 yards to 100 yards—and its composition. W hile probably mainly stony in nature, it could vary widely in the amount of water and metals it contains. Astronomers have measured how much light is being reflected from its surface but the question mark is the reflectivity of that surface. If the surface is very dark, reflecting that much light means it must be a big object. Conversely, if the surface is light, even a small asteroid could reflect a lot of light.

“This is thought to be a L-class asteroid, and this type generally reflects about 20 percent of the light that strikes it,” said Stephen Covey, DSI’s Director of Research and Development. “That would make its diameter about 50 yards and mass about 130,000 tons.”

Deep Space Industries will be harvesting asteroids to create propellant to extend the working life of communications satellites, to supply future explorers and to build habitats and other structures in space. However, 2012 DA14 is not one of its targets as its orbit around the Sun is significantly inclined relative to that of the Earth around the Sun, so that reaching it would take too much energy. Deep Space believes there are thousands of near Earth asteroids that will be easier to chase down than this one. Deep Space Industries plans to send small probes called FireFlies to examine asteroids and allow comparisons with readings taken by Earth and space based telescopes. They are to be followed by DragonFly sample return missions, to lay the groundwork for potential space mining operations in the 2020 time frame.