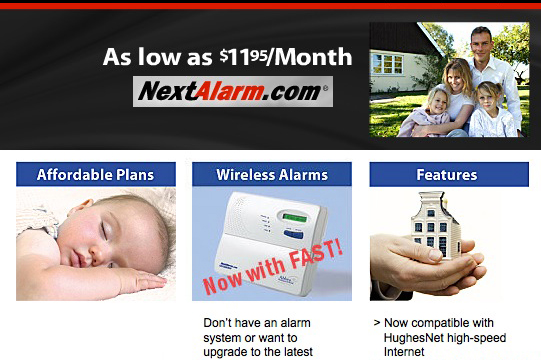 Under the agreement, Hughes will offer all of NextAlarm's products and services to subscribers of its HughesNet® service. The NextAlarm line of products features wireless security cameras, a wireless alarm system, and a patented broadband adapter that allows most existing alarm systems to communicate over the Internet. NextAlarm has developed a special communication protocol that allows its wireless alarm system to be monitored directly over a HughesNet satellite Internet connection. This protocol is exclusive to NextAlarm and HughesNet, making the combination the only way to achieve monitored security over satellite with a mass market solution. NextView, the video surveillance product offered by NextAlarm, is also unique in that it does not require on-site video storage or constant uploading to a remote server. The cameras feature a buffer which is continually updated, but is only sent to the NextAlarm servers in the event of an alarm. When an alarm does occur, the buffer is uploaded and includes a video starting 10 seconds before the alarm and ending five minutes after. This allows NextView to keep cost and bandwidth use to a minimum, while still providing a strong visual record of alarms.