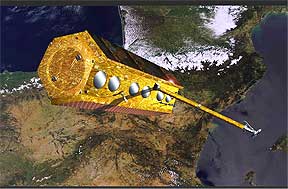 Artistic rendition of the PAZ satellite.
[SatNews] Astrium Services and Hisdesat, the Spanish government satellite service operator, have signed a framework agreement for a...

...joint technology development project with the aim of establishing a constellation approach for the radar satellites TerraSAR-X and PAZ. The German satellite TerraSAR-X, launched in 2007, reliably delivers high-resolution radar data for versatile applications to worldwide customers. PAZ is the first Spanish radar satellite designed as a dual use (military and civilian) mission to meet operational requirements in the field of high resolution (up to 1 meter) observation. PAZ is scheduled for launch in 2013 into a polar orbit, which will be specifically optimised to improve the time to get images over key areas of interest when combining TerraSAR-X and PAZ into a constellation. 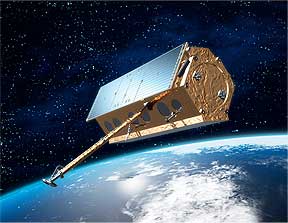 TerraSAR-X, artist's concept image.
Operating these two virtually identical satellites in a constellation will afford Astrium and Hisdesat with a more flexible capacity management of their systems. The company’s customers and partners will benefit from enhanced performance and service levels thanks to improved revisit time, service reliability and increased data acquisition capabilities. The constellation approach will also provide improved system redundancy and back-up for both satellites in case of maintenance phases. A wide range of time-critical and data-intensive applications will benefit from this constellation approach, such as precise monitoring and faster detection of surface movement activities: