[SatNews] Astrium, has been awarded a contract by the European Space Agency (ESA) to pursue...

...development of the Ariane 5 Midlife Evolution (A5 ME) launcher. The decision on the final development phase of Ariane 5 ME will be taken by the ESA member states at the upcoming Ministerial Council meeting slated for November 2012. Ariane 5 ME is a major ESA program adopted by the Ministerial Council in 2008 and aims to modernise the current Ariane 5 launcher. Based on the “two-in-one launcher” concept, the program will be capable of placing up to 12 metric tons of payload in geostationary orbit, with two satellites of over five tons being launched in a single flight.

The main upgrade for the Ariane 5 launcher is a new upper stage equipped with a Vinci® restartable cryogenic engine developed by SNECMA (Safran Group). The nose fairing will also be extended by three meters to accommodate larger and heavier payloads. Ariane 5 ME will thus boost launch capacity by 20 percent compared to the current Ariane 5 ECA and Ariane 5 ES, for the same price. Meaning costs are reduced by 20 percent per kilo. Astrium’s unique role as an end-to-end prime contractor for Ariane 5 since 2003 has generated the added value that drives down costs. 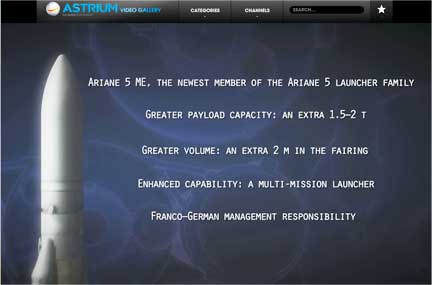 “This 112 million euros contract underscores that maturity of the Ariane 5ME program,” said Alain Charmeau, CEO of Astrium Space Transportation. “As prime contractor, Astrium will continue to coordinate the work of more than 30 companies across Europe, with whom we have already completed major phases in the development of a launcher that anticipates the needs of both commercial and European institutional markets.”

This new contract, as well as the additional activities currently in the contracting stage, will enable the development of the Ariane 5 ME to continue until the November 2012 ESA Ministerial Council meeting to decide on the start of the next phases in the project. The ESA awarded Astrium an initial two-year development contract worth 150 million euros in December 2009. In December 2011, the ESA validated the Ariane 5 Midlife Evolution launcher project following the Preliminary Design Review. More than 100 European specialists in different fields have approved the development plan and specifications for the various sub-systems of the launcher.

The acceptance of the Preliminary Definition Review, which began on 31 August 2011, was a major step in the launcher validation process, and for the new upper stage in particular, and provided the green light for the Ariane 5 ME development program. Lastly, on March 12th, Astrium and Air Liquide announced the creation of EuroCryospace, a strategic partnership that will focus on the development and manufacture of cryogenic fuel tanks, in particular the fuel tank for the upper stage of the Ariane 5 ME, to be produced at a new plant in Bremen. As soon as the member states make their decision known at the end of 2012, Astrium and its partners will commit to performing the Ariane 5 ME test flight from 2017, allowing Europe to consolidate its access to space.