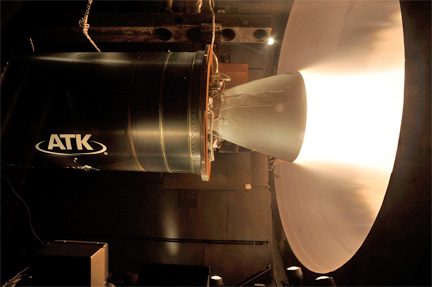 ...CASTOR® 30XL upper stage solid rocket motor at the U.S. Air Force's Arnold Engineering Development Complex (AEDC) in Tennessee. The test was the final qualification for the ATK commercial motor, which was jointly developed by ATK and Orbital Sciences Corporation (NYSE: ORB) in just 20 months from concept to completion. The CASTOR 30XL is designed to ignite at altitudes in excess of 100,000 feet. In order to accurately test the motor performance, the static fire was conducted at AEDC using a vacuum chamber specially designed to simulate upper atmospheric conditions. Initial data indicate the motor performed as designed, and ATK will now analyze the results against its performance models.

The motor is intended for use by Orbital as an enhanced second stage of the Antares™ launch vehicle. Antares is slated to perform commercial cargo re-supply missions to the International Space Station (ISS) for NASA, to be demonstrated under the Commercial Orbital Transportation Services program for later delivery missions to the ISS under the Commercial Resupply Services contract.

The CASTOR 30XL solid rocket motor is 92 inches in diameter, 236 inches in length and weighs approximately 58,000 lbs. The nozzle is eight feet long with a submerged design with a high-performance expansion ratio (56:1) and a dual density exit cone well-suited for high altitude operation. The CASTOR 30XL is a high-performing upper stage motor in ATK's commercial product line of solid rocket motors. The company's flight-proven rocket motors are used for military and commercial customer missions. A basic version of the CASTOR 30 motor was tested at AEDC in December 2009 and will fly the initial Antares missions. The CASTOR 30XL is an upgraded version that will fly later operational missions requiring greater payload capacity.

The CASTOR 30XL motor was tested at AEDC due to their unique capability of being able to simulate second stage flight conditions. The Air Force base has 27 test units with capabilities that are unique in the United States and 14 that are unique world-wide. A key partner supporting ATK through development and production of the CASTOR 30XL motor is Moog Inc. in East Aurora, New York, which produced the Thrust Vector Control (VTC) System. This system was developed by the C30 program to have common hardware for future use on other ATK motors.