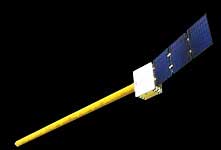 ...ORBCOMM Inc.’s (Nasdaq: ORBC) Generation 2 (OG2) prototype spacecraft at SNC’s Space Systems facility in Louisville, Colorado. The vibration and thermal vacuum testing is considered to be the most critical set of tests prior to launch. With testing complete, the spacecraft is now scheduled to be launched in conjunction with SpaceX’s first Cargo Re-supply Services mission to the International Space Station on the next Falcon 9 launch vehicle.

The first ORBCOMM OG2 spacecraft, after an orbit-raising sequence unique to this launch profile, will serve as a prototype for a total of 18 new satellites that will constitute the company’s second generation satellite network. These satellites are designed to greatly enhance ORBCOMM’s space-based global Machine-to-Machine (M2M) network with greater bandwidth, more capacity and higher gain, all of which will deliver improved messaging performance, higher data transmission speeds, increased coverage and capacity several times that of the current first generation constellation. In addition to the M2M payload, each satellite also carries technology that will collect Automatic Identification System maritime tracking signals from around the globe, resulting in global “near-real-time” service upon completion of the constellation.

Sierra Nevada Corporation is the general contractor for all OG2 spacecraft with Boeing Argon ST as a subcontractor providing the payload.