[SatNews] August 27th is quite a remarkable day for Optus Satellite. 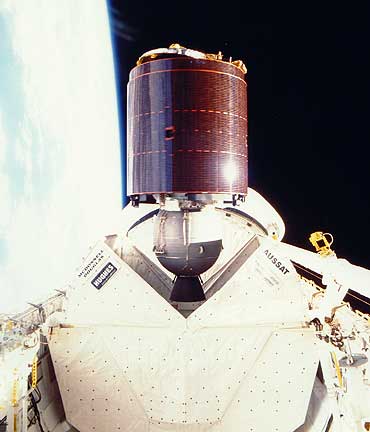 Optus A1 satellite being deployed from the Space Shuttle Discovery, photo courtesy of Optus Satellite
August the 27th is celebrated by the company as this is the 25th anniversary of Optus Satellite. Then known as Aussat, Optus launched the first fully Australian owned and operated satellite, A1, on Tuesday, 27 August 1985, on the Space Shuttle 3. This satellite was the first of nine successful satellite launches, which have truly revolutionized the delivery of vital communications services across Australia, including subscription and free-to-air (FTA) television, voice (mobile and fixed), data, Internet and radio services.

Orbiting tens of thousands of kilometres above the Earth, communications satellites have altered the way everyone communicates with one another and have made a real difference to people’s lives, particularly those living and working in regional and remote areas of Australia. The geographical size of Australia and the vast distance between some of our remote and regional communities means that satellite has — and always will — continue to make sense for Australia. Optus is very proud of its Aussat heritage and with 25 years of experience, we continue to be the leading provider of satellite services across Australia and New Zealand. Upcoming is the launch of Optus Premium Satellite, a satellite Internet service that will bring ADSL-like speeds to customers in remote and regional areas. Additionally, Optus has been awarded four multi-million dollar contracts by Australian broadcasters — Southern Cross Media Group, Australian Broadcasting Corporation (ABC), Special Broadcasting Service (SBS), and Imparja Television, to deliver nexgen, digital, FTA services via Optus Satellite across Australia. Plus, there was the successful launch of Optus D3 in August 2009, enabling FOXTEL to deliver digital payTV, offering viewers additional channels and more interactive and on-demand features.