[SatNews] The terminals will be supplied to NICT for mounting on a vehicle and a ship, and will be used as experimental equipment enabling a rapid response to emergencies and natural disasters.

Brisbane-based technology company EM Solutions has won a tender with Tokyo based partner Jepico Corporation to provide its Ka-Band Satellite on the Move (SOTM) platform to the Japanese Government’s National Institute of Information and Communications Technology (NICT).

EM Solutions’ CEO Dr. Rowan Gilmore said he was ‘proud to lead EM Solutions in this Australian export project as it will provide an opportunity for the company’s Queensland engineering team to again showcase its world-leading satellite system design and advanced communications manufacturing capability.’

The upgrade will increase the terminal’s effective data rate up to 20Mbps with a new 65cm diameter antenna dish and 40W radio transmitter. Two SOTM terminals will be supplied to NICT for mounting on a vehicle and a ship, and will be used as experimental equipment enabling a rapid response to emergencies and natural disasters. The terminals maintain broadband data communications even from a moving vehicle or vessel, and will establish a mobile communication ‘hub’ through the WINDS satellite to deliver high speed voice, data and video traffic from the affected site independent of the terrestrial network . 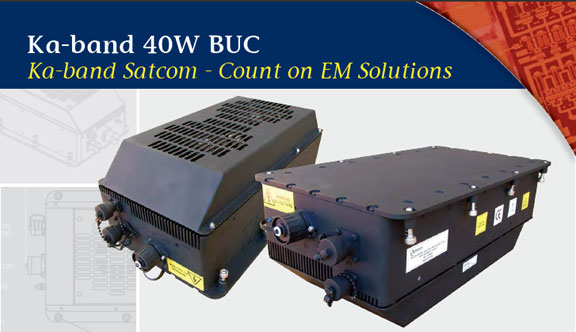 EM Solutions will be at Stand #1712 at the MILCOM 2012 Exhibition in Orlando, Florida from Monday 29th October to Thursday 1stNovember.

Their current project with the Japanese Government is to deliver a 20Mb/sec Ka-Band Satcom on the Move terminal (per attached media release), and they are building a new 40W (Psat) / 20W Plin nanoBUC which is only 8” x 8” x 2” and 6.6 lbs (base-plate cooled configuration) as shown below.