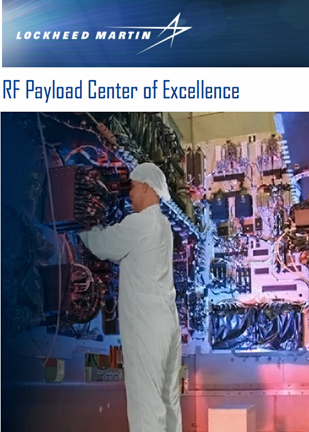 The RF Payload Center of Excellence will focus on developing reconfigurable payloads and advancing satellite systems that many already rely on, from high-def television broadcasts to GPS transmissions and secure government communications. The RF Payload Center of Excellence reduces cost and accelerates development by uniting researchers, manufacturers and analysts in one organization. Bringing people together improves schedule, reduces transportation costs and enhances collaboration between related teams.

RF payload components are important for all space missions. In fact, one or more RF subsystems are embedded in every spacecraft Lockheed Martin produces. Using its partnerships with suppliers and research universities, the center will develop a variety of technologies commonly incorporated in RF payloads, such as antennas, arrays and transmitters for the full spectrum of bandwidth.

The facility co-locates the majority of payload development, production and testing, a first for Lockheed Martin. The center serves as the hub for a network of experts in industry and academia focused on the future of RF technology. Lockheed Martin has shaped this technology arena for more than 50 years, producing 176 of these types of payloads.

The RF Payload Center of Excellence will reinvent the process of payload development through advanced technology research and streamlined manufacturing. Lockheed Martin’s Digital Tapestry uses the same set of digital information to interweave virtual design, 3-D printing and automated assembly, test and inspection. This digital approach maximizes common products, cuts cost and cycle times, and it mirrors the payload strategy of the Optical Payload Center of Excellence, which opened earlier this year.

“Enabling communications so people can make effective decisions is at the core of what RF systems do,” said Rick Ambrose, executive vice president of Lockheed Martin Space Systems. “Our new facility and network of experts position us to support these missions at high rates of production. `