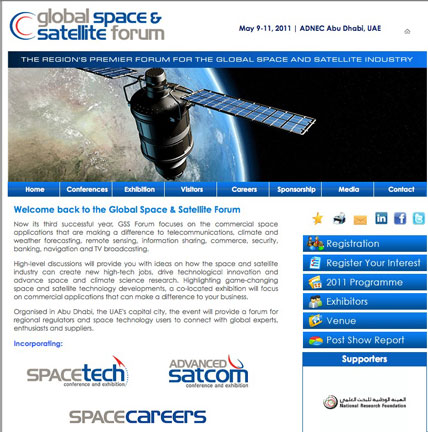 GSSF event homepage
[SatNews] Commercial opportunities along with military and humanitarian demands driving the need for sustainable space and satellite programs across the Middle East will be in focus at the Global Space and Satellite Forum (GSSF) 2011.

“Regional unrest seen in some parts of the Middle East and North Africa over recent months demonstrate the importance of national security and the intelligence-gathering roles that satellite technology can support,” said Nick Webb, Director, Streamline Marketing Group, organizers of GSSF 2011. As leading experts will explain during the three-day event, which takes place at ADNEC in Abu Dhabi from May 9-11, satellite communications also play an important role in disaster relief, particularly in re-establishing communications in areas where normal landlines and mobile telephone infrastructure are destroyed, such as virtually the entire west coast of Japan after it was hit by the tsunami recently. Among the experts speaking at the conference is John B. Sheldon, Professor of Space and Cyberspace Strategic Studies, School of Advanced Air and Space Studies, Alabama, United States. His presentation, Sustainable Space Policy and Programs in an Era of Volatility, provides an overview of the geopolitical ramifications of Middle Eastern space programs and outlines how space capabilities can contribute to regional stability and prosperity. He looks at the requirements of a nation seeking to create a sustainable space policy, including rigorous geopolitical analysis and strategic planning across the various stages, including development, acquisition, operation and protection of space capabilities.

In addition to the long-established players in the international space race - including the US, Russia, China, India, Japan and France – the UAE, South Africa, Iran, Kazakhstan, Nigeria and a number of smaller European nations are ramping up their investment. According to the Royal United Services Institute, there are now at least 50 countries around the world with established space agencies and who have developed and launched satellites. The UAE currently has one satellite in orbit, the DubaiSat-1 Earth Observation satellite, which was launched in early 2009. Additionally, the Yahsat-1A communications Satellite is due to launch within the next few months, having attracted some $1.4 billion in funding from the Abu Dhabi Government’s investment division, Mubadala. Another government-backed organization, Aabar Investments, has also committed $280 million to Virgin Galactic’s spaceport, the embryonic space tourism sector, which experts estimate could be worth $7.5 billion by 2030. “Stakeholders within the region’s space, science and related technology sectors will gather in the UAE capital to hear about the significant opportunities that exist, particularly within the telecommunications, media and entertainment sectors,” commented Webb.