The company website may be accessed via this direct link.
[SatNews] From The Scotland Blog, a Glasgow start-up has entered the space race with tiny, inexpensive satellites.

Built from 5cm cubes and launched into orbit for the price of a family car, a Glaswegian entrepreneur has built what may be the world's most inexpensive satellite, launched from revamped Russian missiles. This 23-year-old entrepreneur hopes to make Scotland a key player in a new era of space science, by selling tiny, inexpensive but fully-functioning satellites, launched from reconditioned Russian missiles.

Tom Walkinshaw, founder of fledgling Glaswegian company Alba Orbital, aims to build the diminutive machines for universities, businesses and amateur space enthusiasts. The spacecraft, known as PocketQubes, start off at just five cubic centimetres each and can weigh as little as 150g, but can be extended or stacked together to build larger satellites. They can be manufactured and launched for a fraction of the cost of even a small conventional satellite. Walkinshaw said that the devices could have any number of practical educational or commercial uses:

Walkinshaw started his company with the intention of providing a "burial-at-space" service for people wishing to have their ashes launched into low earth orbit. But he was forced to change his plans when his application for a launch license was rejected by the UK Space Agency. Now he has turned to crowdfunding site Kickstarter to raise capital for his business, offering satellite components in exchange for financial support.

He said, What we're offering at the moment is the structure—the body of the satellite. Basically, it's the box that all of your stuff goes in. Eventually we want to offer the other key components—the electronics and the software that makes everything work. Once you have that, the big step is obviously getting it into space. That's really tightly regulated, which makes it tough for entrepreneurs, but we're working with a company which arranges launches on the Russian Dnepr-1 spacecraft, a converted intercontinental ballistic missile. He added that support for the project had come from further afield than he had first expected.

One of the company's Kickstarter backers is from Puerto Rico. It's not somewhere you'd immediately associate with the space industry, but it's the kind of thing that's becoming more possible these days. Suddenly private companies, groups and individuals are able to do the kind of thing that only governments could do previously. It's become known as the New Space movement.

One of the biggest factors in this broadening of participation in space projects has been the development of open standards which allow anyone to build projects to an established design. The PocketQube is one example, and it has been adopted by a dedicated community of academics and enthusiasts. The first four functioning devices, built by teams in America and Germany, are set to be launched in November. 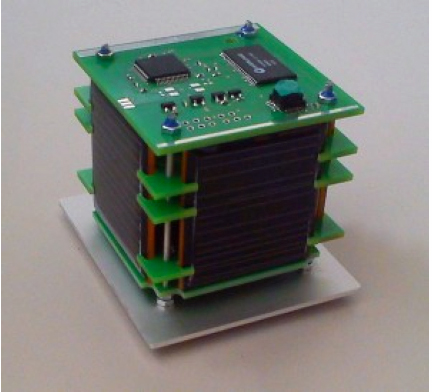 Photo of the WREN PocketCube, courtesy of STADOKO UG.
Walkinshaw said, "One of the projects is really impressive. It's called WREN. It was built by a German startup company and it's got a camera, thrusters and an orientation wheel which lets it spin about. It's a lot of technology to fit into a five centimetre box.

"The primary focus at the moment is on science and research, but this first launch will also be a bit of a proof of concept. It's going to show that you can do useful things with such a small form factor. The technology is in its early stages at the moment, but its usage is going to grow. This is the lowest price barrier to getting into orbit, and we're looking to set up a production line which means that if someone's looking for, say, 100 of them for an earth imaging project, the manufacturing costs are going to be really low." He added that he hoped his company would attract some of the world's best engineers to Scotland.

Alba Orbital's plans may be ambitious, but Scotland has a long-established if little-known association with space technology. The first Scottish amateur rocketry group was established in Paisley in the 1930s, and the annual International Rocketry Week event near Glasgow attracts participants from around the world.