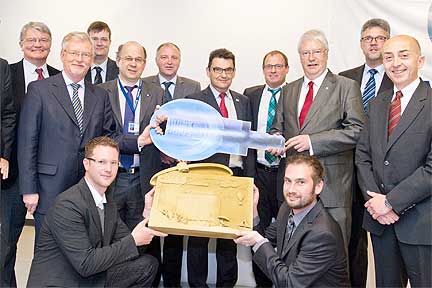 The inaugrual event for Eumetsat.

...during a ceremony on April 20th in the presence of guests from politics, business and public institutions. During the ceremony, speeches were given by EUMETSAT Director-General Alain Ratier, Prof. Klaus-Dieter Scheurle, State Secretary of the Federal Transport Ministry, Hesse State Minister Jörg-Uwe Hahn, and the Lord Mayor of Darmstadt, Jochen Partsch. The modern, high-tech building will host the technical infrastructure necessary to control EUMETSAT satellites in orbit, to process their data to extract the best possible information for meteorology, climate monitoring and other environmental applications. The systems used to make these data available to the worldwide community will also be installed in the building. The technical systems hosted by the NIB will be EUMETSAT’s main asset for innovation on the ground, infusing new science into the processing suite to extract new information from current and future satellites, including Meteosat Third Generation (MTG) and EUMETSAT Polar System Second Generation (EPS-SG). All this will all be done in a more environmentally-friendly manner as the NIB is designed according to the European Code of Conduct on Data Energy Centre Efficiency to reduce carbon dioxide emissions.

Ratier thanked everyone who contributed to the NIB project: the architect and the construction company contracted by EUMETSAT for delivering on time and within specifications, as well as the EUMETSAT project team. He added, “Once all systems have been migrated, you will feel the pulse of EUMETSAT beating in this building!”